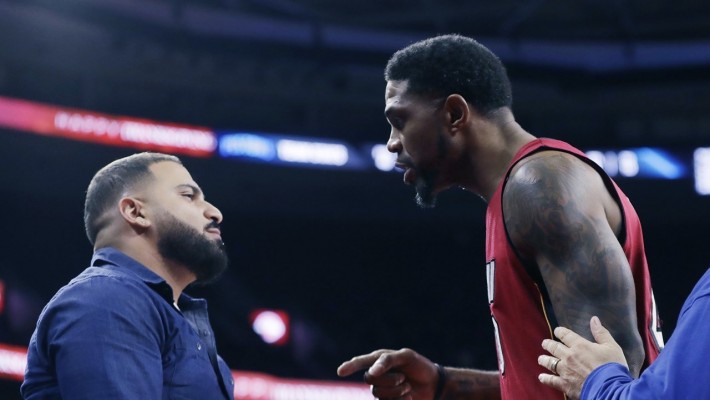 Breakups are messy and inevitably lead to drama.

For the Miami Heat, 2016 has been a drama-filled year that started to become truly ugly when it decided to not re-sign 13-year veteran Dwyane Wade and unsuccessfully pursue coveted All-Star Kevin Durant during free agency.

This unfortunate divorce of sorts was the catalyst that has led to a very problematic 2016 season thus far for the organization.

As it stands the drama is as follows: the franchise wants to cut ties with Chris Bosh to clear up $25.3 million of cap space for next season and $26.8 million for 2018-19, the team is tied for the second-worst record in the Eastern Conference (4-10), and the Heat recently held an impromptu team meeting after losing 107-84 to the Detroit Pistons to discuss the team’s state of affairs.

Oh yeah, and Udonis Haslem is beefing with opposing fans.

Haslem felt insulted by a fan during the team’s game against the Detroit Pistons on Tuesday night and proceeded to exchange heated words with the individual. He is not expected to be fined and did not hit the fan, but that altercation is the perfect microcosm in gauging the Heat’s temperament and pulse as a franchise currently.

This outburst is not indicative of Haslem’s anger issues — it is a reflection and culmination of weeks of playing subpar basketball and having to deal with team distractions as well.

Let’s start at the beginning.

It is difficult to fault the Heat for re-signing center Hassan Whiteside, but opting to offer Wade less money and not putting forth any effort to bring him back was a huge loss for the Heat.

Emotionally, it lost the face of the franchise and fan favorite of the last 13 years, but beyond the superficial, the team lost its only true playmaker on offense. Whiteside does not have an established post game yet, and guard Goran Dragic has not been able to bear the responsibility of running the offense alone.

The result: despite an elite defense, the Heat have the third-worst scoring average in the NBA at 95.1 points per game, according to Synergy.com. When you consider the Golden State Warriors are first in the league at 119.2, the Heat’s offense looks even more ineffective.

Couple losing Wade with Bosh’s health issues, and you have two huge voids left to be filled by a young team with no playmaking ability.

Let’s move on to the Bosh situation.

Every month or so, the relationship between Bosh and the Heat becomes more contentious. The most recent fight is probably the messiest as the Heat now have to hope that Bosh does not play this season and plays less than 25 games for any organization next season to ensure the franchise has the cap space to make a trade this season or become a factor during free agency the next two summers.

So Wade divulges that he felt disrespected and short-changed, and now the Heat stand to benefit from Bosh not playing in the NBA period — something that he has expressed would crush him because he still wants to play the game he loves.

Bosh’s issues with blood clots began before Wade was not re-signed, but during a losing season where the team looks lost on the court, the Bosh drama is just one more attraction to behold in the circus show that is the 2016 Heat team.

Losing Wade and Bosh has the offense depleted and the team losing, which has led to a team meeting after a loss just 14 games into the season.

It has been the season of loss so far. And losing Wade was a terrible omen with ramifications the Heat most likely did not foresee.

However, there may be a silver lining in a losing season as it could lead to a high draft pick in 2017.

Still, it is early in the season, and players do not enjoy losing while fans look away — even if it means possibly obtaining a high draft pick.