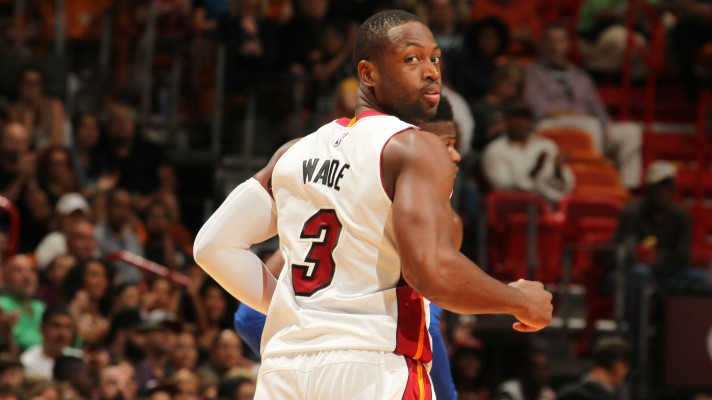 The return of former Miami Heat guard Dwyane Wade to American Airlines Arena will take place on Thursday night. That pending event has caused the future Hall of Famer to reflect on his departure from the only team he had ever played for since entering the NBA in 2003.

Wade spoke with CSN Chicago on Monday after his Chicago Bulls team blew out the Orlando Magic by a 112-80 score. He indicated that the reality of the way he was treated by the Heat reflected his approach in choosing to go elsewhere in free agency.

“I thought it was an opportunity I would be there forever, but s–t happens,” Wade said. “And when s–t happens, you gotta be prepared to (move on). I found out very quickly that this is a business.”

It’s telling that the lone person from Miami that he hasn’t spoken with since leaving is team president Pat Riley. Despite that apparent snub, Wade made the effort to say that he understands the situation.

“People might not believe me, but I have no hard feelings toward Pat,” Wade said. “Everything happened the way it was supposed to happen, everything happens for a reason, so I’m fine.”

Still, Wade was annoyed that his past loyalty wasn’t taken into consideration during negotiations.

“That’s it. When you get respect, that’s what you get back,” Wade said. “I’ve given nothing but respect. I feel like a lot of things in this world and this league are mishandled from the notion of communication. That’s it.

“At the end of the day, I talked to those guys and I told them, ‘It’s free agency. I understand y’all have a job to do, and I have a job to do as well.’ I let it be known I was going to be a free agent and I wasn’t waiting by the phone for them to call me.”

That loyalty included taking less in order to accommodate the signings of other teammates.

“You do things because you want to do them. All those things I did to stay in Miami was because I wanted to do them,” Wade said. “When I made the sacrifice, when I could’ve gotten $127 million and I took $110 million to make sure LeBron and Chris (come) but I also have UD (Haslem) stay, those were things I wanted to do. I didn’t want to be in Miami and enjoy the success and not have UD there.”

Wade’s age, the need to retain fellow free agent Hassan Whiteside and the quest to bring in the year’s biggest free agent, Kevin Durant, all conspired against him during those negotiations.

“The biggest thing, is all about the way you communicate. I understand this business just as good as anybody,” Wade said “But it’s a way, someone like me, a way you communicate what you’re trying to do, and how you’re gonna do it and what it looks like for me.”

While Wade expects cheers from fans on Thursday night, he did want to make one thing clear about the circumstances of his departure.

“There’s this notion out there that I expected stuff on the back end,” Wade said. “No, I’ve always wanted as a player what I was worth.

“I ain’t gonna say, oh, I was happy go lucky,” Wade said. “Then I opted out again and the next year I signed the one-year, $20 million deal because I never made $20 million in a season. I wanted multiple years, they wanted to be players in free agency, I understand that.”

Wade emphasizes that he made the effort to return to Miami, but that it wasn’t reciprocated.

“I tell the (Heat) fans, I did everything I could to make sure I stay here. And then it got to a point where, you know what, it was no more I could do. I had to go and do what’s best for myself and my family and my future when it comes to my happiness. I want to feel wanted as well. Who doesn’t (want to feel) appreciated?”

That led to the idea of going to Chicago, meaning that Wade could return to his hometown and receive the salary he thought he deserved.

“No. At this age and point in my career, it wasn’t,” Wade said. “And that’s why I tell everybody it wasn’t a hard decision. It’s tough to make a decision when you know you get a couple days to make this decision and it’s not gonna be the most popular decision because of X, Y and Z.

“For me, I don’t know how many more years I have left to play this game. It’s about doing what I want to do at this moment. Not saying I didn’t do what I wanted, I always did what I wanted, but it’s continuing to have the ability to do that. And I did. I put myself first for once. I didn’t say, hey, I waited on Miami to come to me,” Wade said. “At the end of the day, I could’ve come back to Miami and made great money. The contract they offered me was good. By the time it got to me, my heart was somewhere else.”

Wade is motivated to show the Heat that he still has the skills, though his emotions prior to the game are still up in the air.

“Bobby (Portis) just said it in the bathroom, ‘Thursday’s gonna be crazy, you ready?’ I said ‘Nah, I ain’t.’” Wade admitted. “I don’t know what kind of emotions will come over me. I don’t know how I’ll feel, what it’ll look like. I’ll get ready when it comes.”