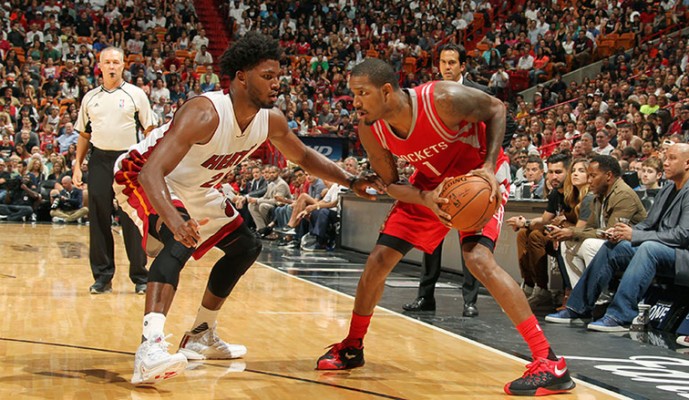 And this season’s Miami Heat team is defensively elite, but 12 games into the regular season, the team is struggling to win games — let alone be a title contender.

Even so, if the Heat hope to play regular season games with playoff implications in March and April, it will have to rely on its defense. Re-signing Hassan Whiteside during free agency ensured that the Heat would have solid rim protection, blocks, and the occasional flexing session, but the overall team’s defensive stats are also impressive thus far.

According to Synergy.com, a site where the NBA tracks a plethora of statistics on the player and team level, the Heat’s defense is among the best in the league.

In other words, it gauges a team’s defensive impact on the opposing team’s usual shooting percentage. The lower the number, the bigger defensive impact the team is displaying. Through the first 12 games, the Heat is ranked No. 1 with a -2.8 team overall difference percentage.

This means the 12 teams that have faced the Heat this season collectively shot 2.8 percent worse as a team when they face the Heat compared to when they play against other teams. This is a next-level stat because opposing field-goal percentage on its own is not truly indicative of a team’s defensive impact.

If the Heat was facing weak offensive competition, then obviously the opponent’s field-goal percentage would look great. This stat eliminates that variable and measure’s a team’s impact based on how opponents shoot versus the team in question compared to the rest of the league.

Ranked second on the list is the Los Angeles Clippers with -2.5 and third is the Charlotte Hornets at -1.9. Although Whiteside alone has a significant impact on this team stat, in order to be ranked No. 1 in the league by nearly half a percent, his teammates also have to be playing defense in some capacity.

For instance, guard Dion Waiters had received some criticism early on this season for not contributing enough defensively; however, Waiters is currently holding players who shoot within five feet of the basket to just 30.4 percent from the field — good for third-best in the NBA.

Thanks to Whiteside, the Heat is holding opponents to a 44.3 field-goal percentage at the rim. This puts the team at the top of the list with the San Antonio Spurs in second place at 46.7 percent. Additionally, the team’s defensive rating is ranked third as it is allowing 98.9 points per every 100 possessions.

After winning back-to-back games, the team is still 4-8 and will have to endure a grueling schedule consisting of nine road contests in the next 13 upcoming games — including back-to-back road games against the Denver Nuggets and Utah Jazz along with another back-to-back set versus the Cleveland Cavaliers and Chicago Bulls.

So what is the takeaway from these defensive NBA stats?

Scoring 114 points against the Washington Wizards is a start.
[xyz-ihs snippet=”Responsive-ImagenText”]