The Miami Heat began summer league play with a 92-76 victory over the Indiana Pacers in Orlando on the 4th of July.

It was the first time the team took an NBA court in an actual game since mid-April in the 82nd and final game of the regular season. While the majority of these players on the Heat’s summer league roster weren’t on the 15-man roster back in April, some of them were—guys like Tyler Johnson, Henry Walker, James Ennis, Shabazz Napier and Zoran Dragic were all members of Miami’s regular season roster.

Along with the veterans, there are two of the Heat’s rookie draft picks that are participating in this year’s summer league, Justise Winslow and Josh Richardson.

Miami will participate in the six-day Orlando Summer League before beginning play in the Las Vegas Summer League from July 10 until July 20.

Though the league standings won’t mean anything when it is all said and done, here are 10 reasons why Heat fans should watch this year’s summer league. 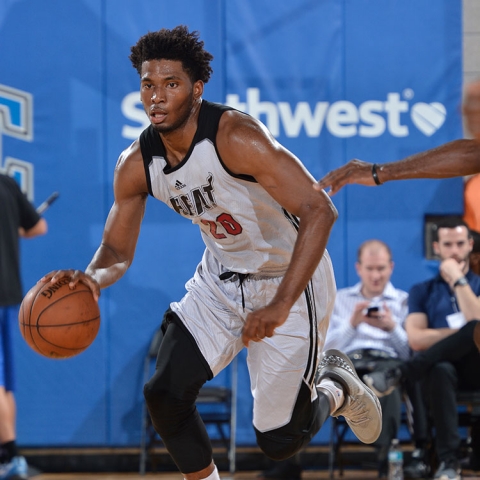 The No. 10 overall pick made his professional debut versus the Pacers and was nothing short of solid as he scored 15 points while showing off his versatility by playing all four positions. He led all Heat players in scoring for the game.

“He was locked in, and I thought he did a great job communicating with his teammates for a guy coming into his first game.”

While Winslow struggled with his shot in his second game, going 3-for-10 versus the Brooklyn Nets, he still showed off his ability to draw contact, as he went to the free-throw line 12 times.

There will be ups-and-downs for the first-round draft pick, but that’s why it’ll be exciting to watch the small forward’s development over the next two weeks.

Next: Plethora of Experienced Players