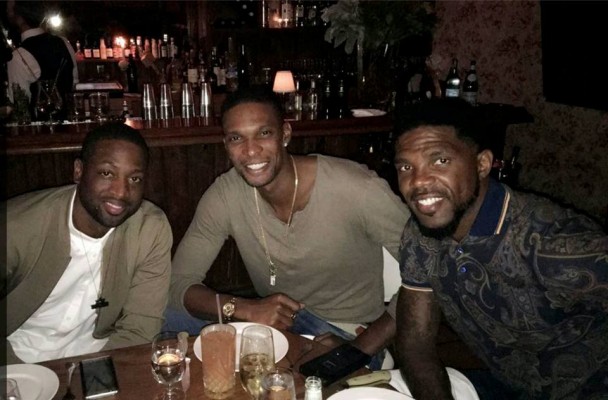 Dwyane Wade held his farewell party in Miami last night with some of his closest South Florida teammates and friends.

Wade has spent the last couple days in Miami enjoying the end of summer before training camp kicks off with his new Chicago Bulls squad. He went to a Kanye West concert with Chris Bosh and Josh McRoberts, held a community bike ride with Udonis Haslem, and topped it off with a party with his friends and family.

Wade’s wife, actress Gabrielle Union, was using Snapchat so we were able to piece together some really touching moments from the party. Here’s a portion of what Bosh said last night:

At the beginning, we hear Bosh talk about loyalty, a hot topic during free agency this summer, and praise Wade for his commitment for 13 years. There’s no way of knowing the whole context of his toast, but it’s definitely something to keep in mind as Bosh currently faces his own difficulties with the Miami Heat organization.

Haslem also made a heartfelt toast about the journey that the once rookies have shared over more than a decade. The Florida native talked about the surreal moment of playing for your hometown team. He even joked about having to split up “Wade County” so that Haslem, Mr. 305, could have his own part of town:

“You started in Chicago,” Haslem toasted. “And you’ve been all around the world and you’ve gained so much exposure, so much success, and then you end back in Chicago. And I think there’s a reason for that. I’ve played my whole career in my hometown my whole life, so I know what an incredible experience it can be. So I actually, as a friend, I would love him to experience that.

“I was like, that’s my boy, that’s Wade County,” Haslem said. “We were able to divide it. I was like, all right, you take downtown.”

There were lots of gifts exchanged at the party including a special gift basket from the Bosh’s to the Wades. It included a Chicago Cubs hat and a Christmas ornament with a picture of the two teammates.

The Bosh fam also gave the Wades this hat. pic.twitter.com/nfX6UyLua5

McRoberts gave Wade a 13-year-old bottle of Van Winkle Family Reserve Rye bourbon whiskey as a tribute for his 13 years in a Heat uniform.

The night was a bittersweet moment for the players and likely for Heat fans as well who are still upset about Wade leaving. He is set to return to Miami on Nov. 10 so make sure to mark the date, Heat Nation.

? this is all so cute pic.twitter.com/kovKdzPzen