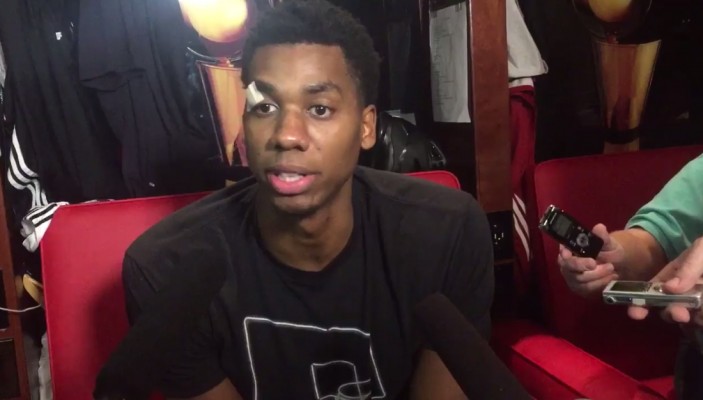 Hassan Whiteside did not mince words about how he felt after the Miami Heat’s heartbreaking double-overtime loss to the Orlando Magic on Tuesday night.

The star center put up a gutty performance against the Magic, which included absorbing a sharp elbow to his ribcage and reopening a cut under his right eye that needed stitches after the game. Whiteside ended the night with 32 points (tied for a career-high), 15 rebounds and five blocks in 47 minutes (also a career-high).

And yet, the Heat still lost.

“No disrespect to the Magic or anything, but that was the most disappointing loss of the season in my opinion,” Whiteside said. “Because we had so many chances to win that game.”

Whiteside went on to emphasize that he believes he deserves to be getting a larger portion of those chances to help close out games.

“They say I’m the franchise player. I would think I should get more,” Whiteside replied when asked if he felt like he was getting enough late-game touches. “But, I don’t know, man. I don’t think so to be honest. Coach is going to coach.”

Does @youngwhiteside get enough touches late in games? "They say I'm a franchise player. But I don't know. I don't think so." pic.twitter.com/Ueeiu71p7f

Whiteside may have had a point about his lack of late-game touches against the Magic because although he took the most shots of anyone on the team (22), only three of those attempts came in either overtime period. His last field-goal attempt was a hook shot on the Heat’s first possession in the second overtime.

In fact, while the star center leads the team in field goals attempted on the season (403), he also ranks eighth on the team in fourth-quarter field-goal attempts at just 2.3 shots per game.

Clearly, the ball is not finding its way into Whiteside’s hands late in games. Head coach Erik Spoelstra may want to consider adjusting this, because of the usual closing five (Whiteside, Goran Dragic, Justise Winslow, Tyler Johnson, Josh Richardson), Whiteside is shooting the ball the best (56.5 percent from the field in the fourth quarter).

One of the drawbacks of involving Whiteside in plays down the stretch, however, is his inconsistency from the charity stripe. For the season, the 7-footer is shooting 54.8 percent from the field but just 53.2 percent from the free-throw line. Given that the Heat missed six of its last 10 free throws in Tuesday night’s six-point loss, Whiteside may want to bring that percentage up if he wants the ball more in crunch time.

Whiteside earned a franchise-player contract over the summer and now is asking to be treated like a franchise player at the end of games. We will have to wait and see if Spoelstra acquiesces his demands and starts giving his prized big man more late-game touches.
[xyz-ihs snippet=”Responsive-ImagenText”]