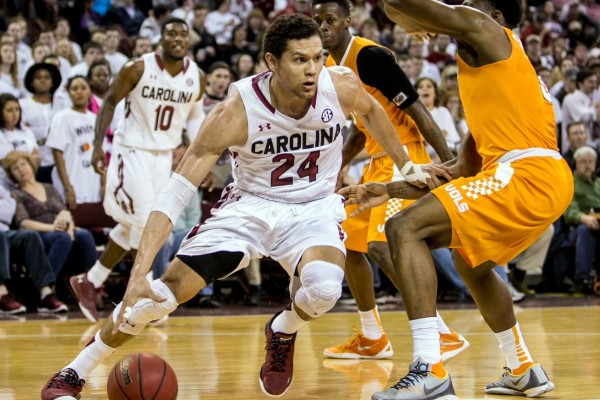 Though the Miami Heat did not have a pick in this year’s NBA Draft, they are still looking to build the team in other ways.

One way to do that is by sifting through the field of undrafted prospects that could have a shot at contributing in the future. It turns out, that’s exactly what Miami did, as they recently signed former University of South Carolina small forward, Michael Carrera.

Carrera is a 6’5,” 214-pound player who had success as a four-year man at South Carolina. He is currently training to be a part of the national team for his home country of Venezuela in the upcoming 2016 Rio Olympics, but after that, he will begin playing for Miami’s summer league squad in July.

Last year, the Heat’s second-round draft pick Josh Richardson established himself as a valuable asset throughout his time on the summer league team and eventually earned an important role on the Heat roster. Heat coaches are hoping Carrera will have similar success when they begin to see what he can do next month.

In an interview with The Post and Courier, Carrera’s head coach at South Carolina, Frank Martin, said scouts have told him the following:

“Carrera’s ability to shoot from distance, and defend from the point guard through the small forward spots, is what makes him attractive. If you think about who he was as a freshman, to think four years later, that’s what NBA folks describe him as — it gets me excited that we tried to do the right things with him, and he did the right things to make himself a better player.”

The Venezuelan native has a knack for grabbing timely rebounds and has built a reputation as a solid perimeter shooter. That works well for the Heat because those are two areas in which the team desperately needs more production. He also doubled his points per game from his junior year to his senior campaign. His scoring average leaped from averaging 7.1 points to 14.5 points per game.

Currently, Heat small forward Luol Deng is a free agent and Miami may not be able to retain the veteran going into next season. If Carrera works out in summer league play, he may be a viable option at the three spot as his game develops over the coming months.
[xyz-ihs snippet=”Responsive-ImagenText”]