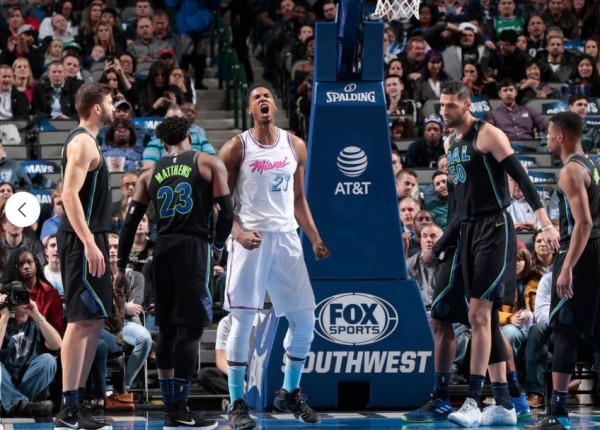 (Dallas, TX)  – Tyler Johnson‘s free throws in the waning seconds of Monday night’s game against the Dallas Mavericks were far more integral than they should have been. After leading most of the second half by double digits, the Miami Heat let the Mavs battle back into the game to make things very interesting in the closing minutes. Luckily, Johnson managed to capitalize on both of his attempts from the line and solidified the win for Miami, 95-88.

“We have to manage all the different emotions that you have in one of these kind of games that go down to the wire,” Heat head coach Erik Spoelstra said following the win. “It’s going to be a great opportunity for us to learn from that, how to execute under those kind of circumstances. I think it was good for us to go through this.”

With 6:10 left in the fourth quarter, Miami seemed to be well on its way to an easy victory with a 17-point lead at 85-68. The Mavericks refused to away go, however, as Harrison Barnes and Dennis Smith Jr. led their team on a 16-6 run to pull to within seven points with just over two minutes left in the game.

The Heat had an opportunity to put the game further out of reach on their following offensive possession, but they failed to take advantage of a huge offensive rebound by Hassan Whiteside, who dominated much of the game with 25 points, 14 rebounds and two assists.

The Mavs responded in a big way when Wesley Matthews pulled up from deep and hit a 3-pointer with 1:18 left in the game to cut Miami’s lead to just four points.

Once again, the Heat had a chance to ice the game. Instead of coming up with a score, however, they committed a shot clock violation. Dallas took advantage of the Miami miscue as Barnes was sent to the free-throw line and hit both shots to make it a one-possession game at 91-88 with 44 seconds left on the clock.

Luckily, the Heat finally managed to get a score when Goran Dragic, who finished the night with 13 points on 6-of-14 shooting, hit his first points of the final frame with a score inside the paint. The Mavs failed to answer on the other end, and the Heat were able to get out of Dallas with the win.

“We just got guys that can stand up when they need to,” Josh Richardson said following the win. “I think that says a lot about our character. Whether we’re up in the clutch or down in the clutch we always seem to try to find a way.”

The Heat survived the late-game meltdown thanks to solid play earlier in the contest. Richardson, who had 14 points, four blocks, three rebounds, three assists, and two steals, was instrumental in a second-quarter surge that gave the Heat a 51-41 lead with less than a minute left in the first half.

When the Mavericks brought the score back to single digits early in the third quarter, Johnson hit a clutch 3-pointer to stop the bleeding. The shooting guard played well in his second game back from injury and finished the night with eight points, three rebounds, three assists, and three steals in 28 minutes of play.

Whiteside took over from there, scoring four straight field goals to help the Heat take a commanding 71-55 lead late in the third quarter. While the Mavericks were able to battle back and make things interesting late in the game, the final score might not have been in Miami’s favor had it not managed to extend its lead earlier in the contest.

After losing four of their six previous games, the Heat have now won two straight leading up to a huge Wednesday night matchup against the Cleveland Cavaliers. The Cavs currently sit at third in the Eastern Conference, but have struggled as of late and are currently just one game up on the Heat in the conference standings.

The Heat will look to put their best foot forward against LeBron James and the Cavs as they prepare for a potential playoff preview.
[xyz-ihs snippet=”HN-300×250-TextnImage”]