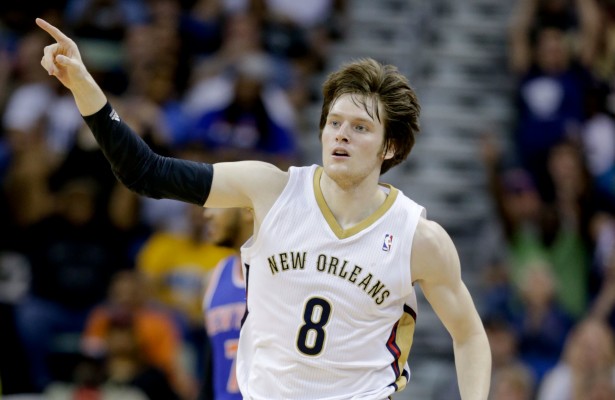 OFFICIAL: The @MiamiHEAT have acquired Luke Babbitt from New Orleans in exchange for NOP’s own 2018 2nd-round pick & cash considerations.

That February trade took place on the final day of the trading deadline when the Heat sent Jarnell Stokes and $700,000. Stokes was then released the following day.

The Sun Sentinel’s Ira Winderman indicated that the draft pick is not a major loss:

The pick going to the Pelicans for Babbitt from Heat (Sun Sentinel has confirmed deal) is Pelicans' protected 1-55 in 2018.

The 16th player taken in the 2010 NBA Draft, Babbitt was selected by the Minnesota Timberwolves, but was traded that night with Ryan Gomes to the Portland Trail Blazers in exchange for Martell Webster. He signed with New Orleans as a free agent in 2014.

Babbitt is 6’9″ and 27-years-old and comes off a season in which he played in 47 games and averaged 7.0 points and 3.1 rebounds per game. His main asset is his ability to hit from long-range, hitting 40 percent of his three-pointers during the 2015-16 season.

His acquisition is a low-risk one for Miami, given the fact that he’s only scheduled to make $1.227 million for the upcoming campaign. Whatever value he provides will undoubtedly be in a reserve capacity.
[xyz-ihs snippet=”Responsive-ImagenText”]