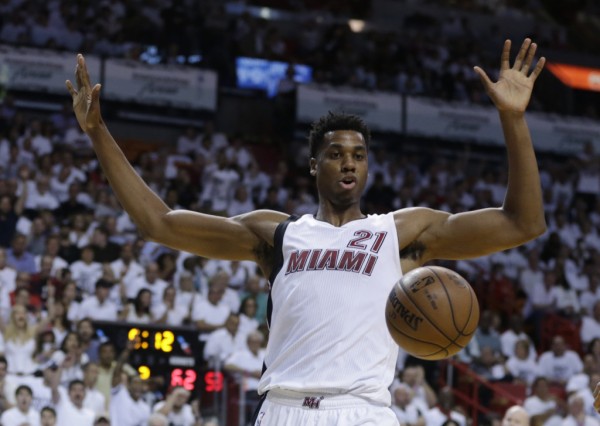 Miami Heat center Hassan Whiteside was held of out of the team’s Sunday practice at Time Warner Cable Arena due to a bruised right thigh. The injury occurred during Saturday’s Game 3 96-80 loss to the Charlotte Hornets.

“I was just rolling to the basket and one of their guys either kneed me or elbowed me in my thigh.” Whiteside said of the bruise that he sustained in the fourth quarter.

The 7-footer dealt with a similar injury (strained left hip) earlier this season and missed six games. Despite the damage, Whiteside, who took electronic-stimulation therapy following practice, seemed adamant to play in Game 4:

If Whiteside is unable to go the Heat would take a huge blow. The starting center has arguably been the Heat’s best player during the first round, putting up 17.0 points, 14.0 rebounds, 3.0 blocks and 1.0 steals in his first career postseason.