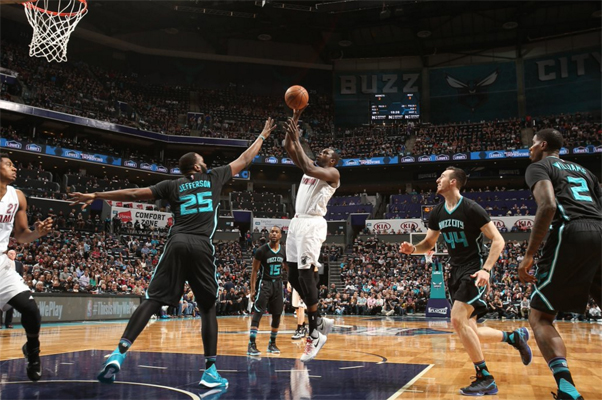 (Charlotte, NC) — After breaking six franchise playoff records in Games 1 and 2, the Miami Heat laid an egg in Game 3, as the Charlotte Hornets cruised to a 96-80 victory on Saturday night. Jeremy Lin scored 18 points, Kemba Walker added 17, while rookie Frank Kaminsky III added 15 of his own as Charlotte nabbed its first postseason win in over 14 years.

It wasn’t as if the Hornets were red hot in this one. They had six players score in double figures but this game was far from pretty. Both teams shot under 39 percent from the field. Hornets head coach Steve Clifford spoke about it after the game:

“Obviously that was more like an old-school playoff game, right? More physical and less offense. We struggled to score but our intensity, our defense, our communication and organization was so much better.”

Meanwhile, it was Miami’s lowest scoring game in its last 90 playoff games.

In the first two games of the series, the Heat scored 67 and 72 points in the first half respectively. It looked like it was about to be more of the same when Heat forward Luol Deng hit four quick three-pointers in the first quarter, but after that, Charlotte took control. They built a 49-44 halftime lead and carried all the momentum into the second half.

Deng scored his fifth three early in the third and the Heat briefly tied things up at 51 apiece, but then the Hornets picked up the pace and went on a 16-0 run while the Heat went ice cold. From there, Miami seemed discombobulated and outmatched on both ends as Charlotte coasted the rest of the way.

“Well, it was back and forth at the timeout, 51-51, and it looked like it was going to be a possession game, and we’d have to find a tough way to figure it out,” Heat head coach Erik Spoelstra told reporters. “The next thing you know, we look up and it’s a 14-point game before we got the next timeout.”

Deng led all scorers with 19 and Dwyane Wade put up 17 for Miami.

“I just think they’re a desperate team,” Wade said. “They played the way you expect a team to play down 2-0 and coming home. I’m not going to be one of those guys that says, ‘Oh we just missed shots,’ their team came out and they won the ball game. Their effort was greater and they deserved to win.”

The home team has now dominated each game in the series but the Heat hope to avoid a similar outcome in Game 4 on Monday.

“It’s the playoffs, man,” Wade added. “We’re going to lose some games in a seven-game series. It’s everybody on the outside that thinks it’s gonna be a sweep. I’m never that one. We didn’t get it in Game 3 but we have to go back tomorrow, find ways that we can get better as a team and try to come out, execute our game plan and try to give ourselves a chance to win Game 4.”