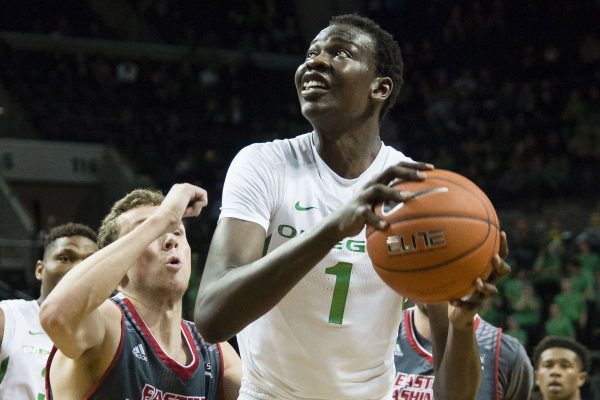 The Miami Heat career of University of Oregon center Bol Bol was an incredibly brief one after he was drafted by the team and then dealt to the Denver Nuggets.

What might have been a source of confusion to fans can be explained by the fact that the Heat made the deal because they had already gotten the player they wanted.

Barry Jackson of the Miami Herald noted the odd circumstances surrounding the pick, and why the Heat sent Bol away so quickly:

“Here’s what happened: When the Heat decided to trade three future second-round picks to Indiana for the 32nd selection, Miami did it with the intent of selecting Stanford forward KZ Okpala, who was the highest-rated player on Miami’s board. Indiana had obtained that draft pick from Phoenix in a trade earlier Thursday.

“After making that selection of Okpala, the Heat quickly decided that it did not want, or need, a second second-round pick. So Miami immediately dealt that pick — which had been acquired on Wednesday from Atlanta — to Denver, according to a league source. That happened long before the 44th pick was on the clock.

“When the Heat selected Bol Bol at 44, it was making that selection for the Nuggets because Miami had agreed, about 20 minutes earlier, to trade that selection to Denver without any knowledge of who would be available at 44, and with no desire to add a second second-round pick to its roster.”

Bol had been considered a potential lottery pick who had dropped because of questions concerning his lean frame, defensive skills, limited collegiate career of nine games, and his overall maturity. In contrast, the Heat were enticed by Okpala’s defensive skills, long-range shooting ability, and overall athletic ability.

When they dealt Bol, the Heat received a second-round pick in 2022 and cash considerations in return. The timing of that draft pick is expected to coincide with the NBA reverting to its previous rule of allowing high school players to be drafted.

That figures to add greater depth to the annual selection process.
[xyz-ihs snippet=”HN-300×250-TextnImage”]