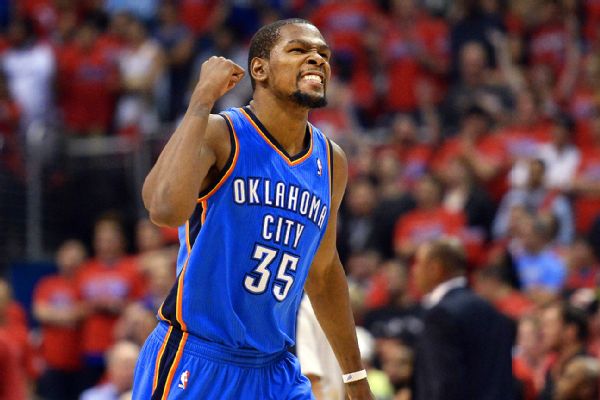 You knew the Miami Heat‘s offseason was going to be crazy. Well, June hasn’t even arrived yet and the circus has already begun.

“The plan is and always has been: Go after Durant and free everything up – so much so that you insulted your superstar this offseason by telling Dwyane Wade no on multiple years, even though that’s what he wanted. Dwyane, who deserves more of your allegiances as business and a company and management than Chris Bosh does. Because the whole thing is get in a room with Durant after this season.

“You do what you want with the information. All I’m telling you is priority No. 1 is not get Dwyane locked up, Whiteside locked up. No. 1 on the list is can you get the superstar that is the biggest in free agency while also taking care of your people around that?”

Le Batard, a proud Miami native, has close ties with the organization and isn’t really spilling anything that hasn’t been covered yet. While Riley declared Whiteside was the main target this summer, he did mention the Heat had the “flexibility” to go after a “whale.”

Whiteside and Wade are certainly game-changers but everyone knows neither of them are in the territory of Durant. The Oklahoma City Thunder forward has averaged 28.2 points, 8.2 rebounds and 5.0 assists this season while establishing himself as a top five player in the league after missing much of the 2014-15 season with an injury. The superstar, who just helped the Thunder knock off the San Antonio Spurs, is a once in a generation player and will be heavily coveted this offseason.

Riley infamously lured LeBron James to Miami in 2010 so the thought of getting “in the room with Durant” is very possible. Even as Whiteside gains attraction from other teams, the Heat’s president knows acquiring a superstar is what will take the the Heat to the next level and that very much means taking a shot at landing Durant.
[xyz-ihs snippet=”Responsive-Ad”]