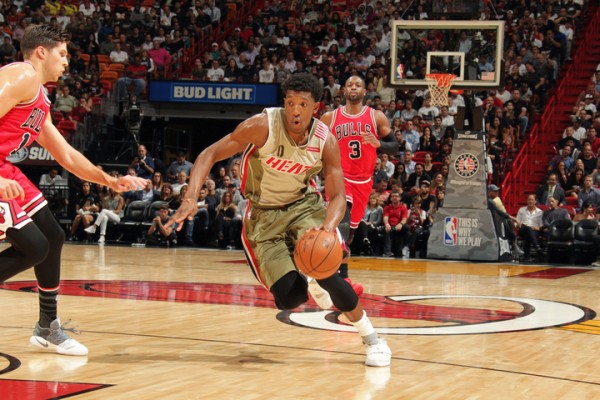 Even though Josh Richardson‘s strong play was overshadowed during Dwyane Wade‘s homecoming game, the second-year guard believes he is almost completely recovered from his MCL sprain.

Richardson scored 16 points and dropped four three-pointers in the Miami Heat’s 98-95 loss to the Chicago Bulls on Thursday night. It was his best performance of the season so far considering he has only played in three games since being cleared.

After practice on Friday, Richardson said he feels close to being his normal self on the court.

“I think I’m really close to it,” Richardson said. “I think I still missed some looks that I would like to have normally made. But I think once the fourth quarter came, I got more confident and knocked a couple shots down for us.”

He looked extremely confident on the floor and shot an overall 6-of-13 from the field. Head coach Erik Spoelstra upped his minutes total from 12 minutes in his season debut last week to 28 minutes against the Bulls.

“He handled it well,” said Spoelstra about Richardson’s minutes. “He felt fine today.”

Richardson might need to play longer stretches in the Heat’s upcoming games due to point guard Goran Dragic‘s recent ankle injury. Spoelstra has not announced who will replace Dragic in the starting lineup against the Utah Jazz on Saturday, but Richardson will undoubtedly share some of the responsibility throughout the game.

The Heat take on the Jazz on Saturday night at 8 p.m. ET on Fox Sports Sun.
[xyz-ihs snippet=”Responsive-ImagenText”]