Don't Miss
Home / Media / Erik Spoelstra: ‘Our Expectation Is to Compete for an NBA Championship Regardless of Who We Have’

Erik Spoelstra: ‘Our Expectation Is to Compete for an NBA Championship Regardless of Who We Have’ 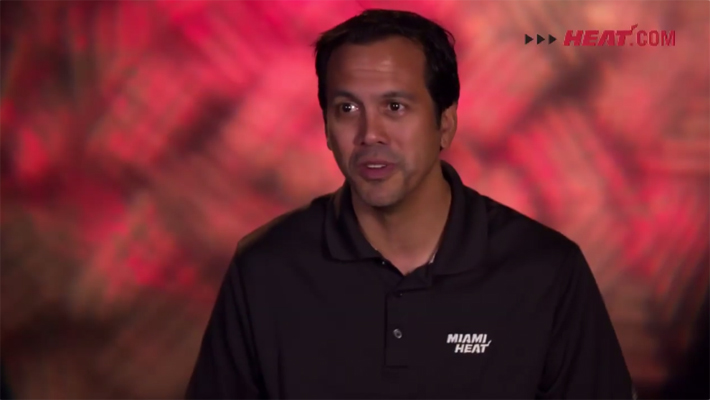 In a video released by the Miami Heat team website earlier today, head coach Erik Spoelstra addressed his thoughts on the current state of the Heat and the expectations for the team moving forward. In typical “Spo” fashion, he expressed nothing but positivity when discussing the current roster, the team’s outlook heading into next season, and the defensive-minded mentality the team must have to compete.

Spoelstra, now entering his ninth year as head coach of the Heat under the tutelage of legendary coach and current team president Pat Riley, also goes on to express how defense must be the key to the team’s success heading into next season.

He also places his undying faith in the defensive prowess of the young guns on Miami’s roster.

“We have defensive-minded young players, which is unique. Josh Richardson is a defensive-minded, versatile, long guard. Justise Winslow came in as a defender. Tyler Johnson is a competitive defender. And now as we build around those guys we’re looking for two-way basketball players that want to compete on both ends.”

It certainly means a great deal that Spoelstra remains undaunted by the somewhat tumultuous offseason the Heat endured. He also seems unfazed by the tall task of taking an uncharacteristically young Heat team under his wing and leading them to a successful season without the guidance and leadership of 13-year veteran Dwyane Wade.

In fact, this will be the first season Spoelstra will not be able to rely on the 12-time All Star shooting guard. Regardless, with the emergence of guys like Goran Dragic, along with the aforementioned Richardson, Whiteside and Winslow, the Heat have a strong young core that any coach should look forward to working with.

As team expectations amongst Heat fans remain somewhat unclear, it seems that Spoelstra maintains the utmost confidence in his group of guys and in the organization itself to compete for an NBA championship once again in 2016-17.
[xyz-ihs snippet=”Responsive-ImagenText”]