Don't Miss
Home / Media / Erik Spoelstra: Hassan Whiteside Has the Potential to Be One of the Best Players in This League

Erik Spoelstra: Hassan Whiteside Has the Potential to Be One of the Best Players in This League 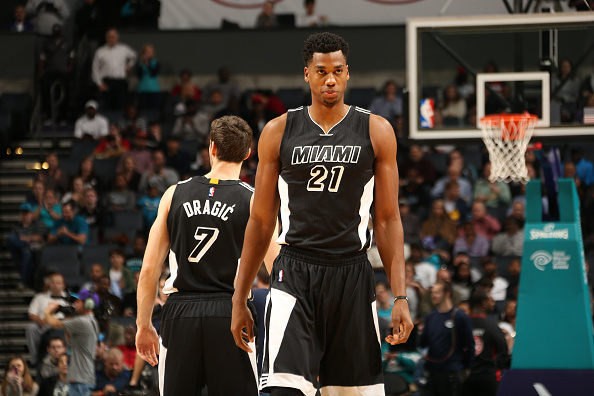 The potential possessed by Miami Heat center Hassan Whiteside has fluctuated between frustrating to off-the-charts, with Miami head coach Erik Spoelstra hoping for more of the latter with the start of the team’s training camp just five weeks away.

Talking about the need to provide Whiteside with more responsibility, Spoelstra’s remarks on the center were posted on the team’s website and reported by Ira Winderman of the Sun Sentinel.

“Hassan and I have really grown to get to know each other, the process of an NBA season, of competition, of ups and downs, of trying to reach a different level, to trying to learn how to shoulder more responsibility to help a team win,” Spoelstra said. “In order for our team to accomplish what we want to accomplish, Hassan has to continue to improve and maximize his potential.”

Detailing what the team’s coaching staff would be working on when it comes to Whiteside, Spoelstra drew no limits.

“He will be working on all of it,” Spoelstra said. “Low-post scoring, that’s the number-one thing he wants to work on, and I’m all for it. He will also work on his skill level at the top of the floor, handling the ball, getting us into second situations as a playmaker, rebounding off the glass.”

Being physically able to manage the rigorous demands of a full season are also on the agenda for Whiteside.

“Continue the overall development with his body, working on his conditioning, getting stronger while maintaining his weight and flexibility,” Spoelstra said. “He’ll have to be able to absorb more minutes, more responsibility, more games, which is a different level of training in the weight room.”

Looking at Whiteside’s overall growth since arriving in Miami in late 2014, Spoelstra was happy with the fact that his center’s been continuing to make the effort to improve over the past few months.

“Where he started to where he finished up at the end of two years is remarkable, his improvement,” Spoelstra said. “And we look for players that commit to the process, commit to getting better. Hassan has committed to the process of trying to get better every single day. But over the course of weeks, months, seasons, you become a better player.”

As far as Whiteside’s impact on the upcoming campaign and his future, Spoelstra again avoided the idea of placing some sort of threshold on his effort.

“I’m not going to stand in his way and put a ceiling on where he can go and who he can become as a basketball player,” Spoelstra said. “I want him to embrace all the challenges. And I want him to be one of the best players in this league. He has that type of potential.”

erik spoelstraFeaturedhassan whitesidemiami heatNews Ticker
← Previous Story Erik Spoelstra: ‘Our Expectation Is to Compete for an NBA Championship Regardless of Who We Have’
Next Story → NBA Snubs Hassan Whiteside in Top 50 Blocks of 2016 Video, Whiteside Reacts Accordingly