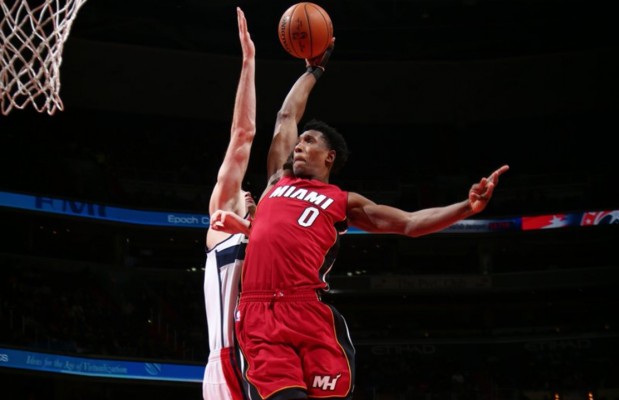 (Washington, DC) – For the first time all season, the Miami Heat (4-8) managed to win back-to-back games with a nail-biting 114-111 road victory over the Washington Wizards (3-9) at Verizon Center on Saturday night.

The Wizards, who were down by as many as 17 points in the fourth quarter, went on a 10-1 scoring run in the final period to make things close late in the game.

“I think the fact that we stayed with what we doing the whole time, even though things weren’t going our way, was good for us,” said Heat guard Josh Richardson, who had 15 points and seven rebounds. “We can’t get too happy now, we’ve just got to keep pressing forward. We’ve got shooters on the team.”

Heat point guard Goran Dragic had a team-high 22 points and six assists on the night, while rising star center Hassan Whiteside recorded his 11th double-double in just 12 games after he scored 18 points to go along with 18 rebounds and three blocked shots.

Newly-acquired power forward James Johnson came off the bench to score 17 points for his second-highest scoring effort on the young season. In addition shooting guard Dion Waiters dropped 16 points to go along with eight assists and four rebounds.

“We did get to some pretty good execution in the second half, and different guys were stepping up, so that was encouraging,” Heat head coach Erik Spoelstra said after the game.

For the Wizards, injury-riddled shooting guard Bradley Beal tied a game-high 34 points for the Wizards in just his second game back from a nagging hamstring injury, while All-Star point guard John Wall also had 34 points of his own in a strictly two-man effort for Washington.

Up next, the Heat will continue their four-game road trip when they take on the Philadelphia 76ers (3-10) at Wells Fargo Center. The contest, which will tip off shortly after 7 p.m. on Monday night, will be broadcast live locally on Fox Sports Sun.
[xyz-ihs snippet=”Responsive-ImagenText”]