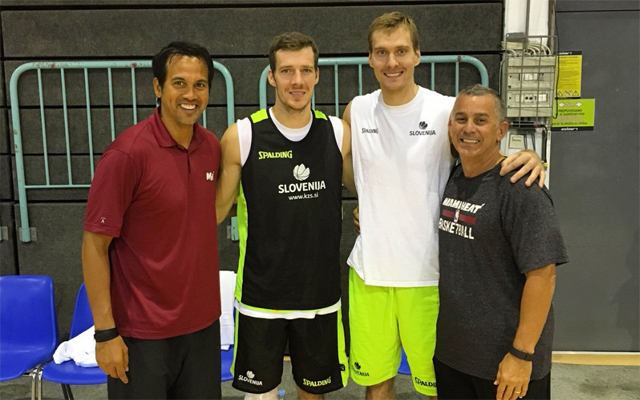 Miami Heat head coach Erik Spoelstra got married this summer but he’s already back to work getting ready for the new season. He’s currently visiting Goran Dragic in Slovenia to check in on the summer work that the point guard has been doing.

Guess who made a stop in Slovenia to visit the Dragićs? Spo & Coach O! pic.twitter.com/CkbCnlYs79

According to dispatches out of Slovenia, Heat coach Erik Spoelstra is spending time with Goran Dragic for a few days.

Spoelstra seems to be making a concerted effort to reach out to the few veterans left on the team to ensure that he will have a strong group of leaders to lead the new additions on the roster. After losing Dwyane Wade and Chris Bosh‘s health status still being a mystery, the team will be looking to Dragic as the primary scoring option come 2016-17.

“You don’t find many players that can attack, that can play fast, that can make other players better in that type of game,” Spoelstra said. “And he’s relentless in getting to the rim. You just don’t see that every single night. And Goran is that kind of player.

“And I think young players gravitate to Goran. They want to play that style. They see the success in that kind of style. They see how he can help them in that style. So it all works hand in hand. And he’s such a gracious competitor. Guys really enjoy playing with Goran and competing with him.”

The style Spoelstra keeps referencing is the fast-paced, up-tempo offense the Heat relied on for most of the second half of last season. Dragic used this to his advantage and played significantly better averaging 17.3 points, 4.6 rebounds, and 6.7 assists per game after the All-Star break.

“It only makes sense for us to maximize Goran’s strengths, and Hassan’s (Whiteside) strengths, Justise Winslow‘s strengths,” Spoelstra said. “Their strengths are their speed, their athleticism. Goran is one of the best fast-break, transition point guards in this game. He will force tempo regardless of how you want to play or how you want to defend. Goran is going to run.”

We are still five weeks away from the beginning of the preseason but Heat fans already know how integral Dragic’s play will be in order for this team to be successful. And that’s the main reason why Spoelstra took the trip to Slovenia — to emphasize the importance his point guard will play in future of the franchise.
[xyz-ihs snippet=”Responsive-ImagenText”]