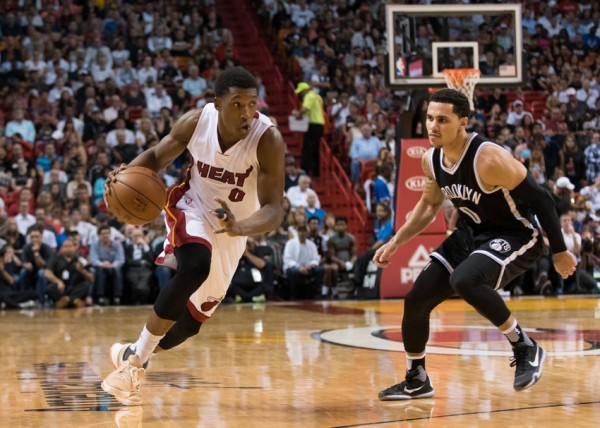 The 2017-18 NBA season will mark the final year on shooting guard Josh Richardson‘s current contract, but that does not necessarily mean his days in Miami are numbered. Thursday is the first day the Miami Heat are eligible to offer an extension to the two-year pro, and while no news of an offer has been announced, the Miami Herald‘s Barry Jackson has reported that the Heat have already expressed interest.

“Guard Josh Richardson became eligible for a contract extension on Thursday, and the Heat privately has expressed interest in offering him one, according to a league source,” Jackson wrote. “The Heat, as of Thursday afternoon, had not made an offer, but one is expected in the coming weeks, the league source said.”

The Heat can offer Richardson a four-year extension for as much as $43 million. If they do make an offer, the ball will then be in the young guard’s court, as he can decide to either sign an extension with the Heat, or opt to become a restricted free agent next offseason. If he were to become a restricted free agent, it is still possible that he would remain a member of the Heat. Thanks to Miami having Richardson’s Bird Rights, the Heat would be able to exceed the cap limit next offseason to match an offer from another team.

Jackson continued to report that Richardson will likely consider a deal once it is offered, but may try to avoid the four-year maximum option:

“Richardson is expected to consider a contract extension, but terms will ultimately dictate whether he accepts. He might be tempted by a two-year deal with a third year option.”

Richardson is currently set to make $1.5 million this upcoming season. Last year, the guard averaged 10.2 points, 3.2 rebounds, 2.6 assists, and 1.1 steals in the 53 games he played in. If Richardson is hoping for a contract worth more than what the Heat are likely to offer, look for those numbers to increase in the upcoming season.
[xyz-ihs snippet=”HN-Native-EndofArticle”]