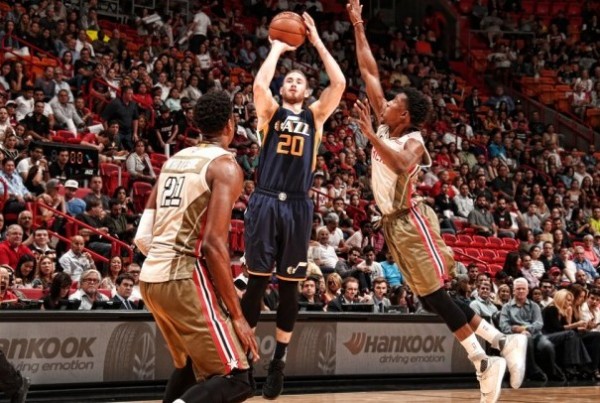 Miami was simply outmatched for the entire game, as the Jazz were led by shooting guard Gordon Hayward’s 25 points on 10-of-20 shooting to go along with nine rebounds and four assists.

Hayward, who missed the Jazz’s first six regular-season games, looked like he hadn’t missed a beat on Saturday night and is now averaging 24.4 points per game through five contests.

Jazz guard Rodney Hood, who had 17 points and four rebounds in Utah’s win, said he has been very proud of his Jazz teammates as of late.

“It’s big with a couple of guys out,” Hood said. “It’s been a long road trip. We’ve played a lot of games in a short amount of days.”

Rising star center Rudy Gobert, who recently agreed to a whopping four-year, $102 million contract extension with the Jazz, had another solid day at the office with 12 points, 12 rebounds, two blocked shots and two steals.

For the Heat, they simply could not get over the hump and take the lead during the second half of the game, as they trailed by as many as 21 points in the fourth quarter.

“Definitely was not expecting that, and that’s not who are. That’s not who we’ve been for the last month, and it is disappointing. This league doesn’t feel sorry for you, so gather yourselves, get on the plane tomorrow and head to San Antonio,” said head coach Erik Spoelstra after the game.

Center Hassan Whiteside had 15 points, 14 rebounds and two blocks for Miami, while newcomer power forward James Johnson came off the bench to score 15 points of his own. Reserve guard Rodney McGruder added 14 points, while guard Josh Richardson started in place of an injured Goran Dragic and finished with 12 points, four assists, three boards and two steals.

“We’ve just got to keep working,” Whiteside said after the game. “It’s not easy to win in this league.”

Up next, things don’t get any easier for the Heat as they hit the road to take on the San Antonio Spurs (7-3) on Monday night. The contest, which is scheduled to tip off shortly after 8:30 p.m. ET, will be broadcast live locally on Fox Sports Sun.
[xyz-ihs snippet=”Responsive-ImagenText”]