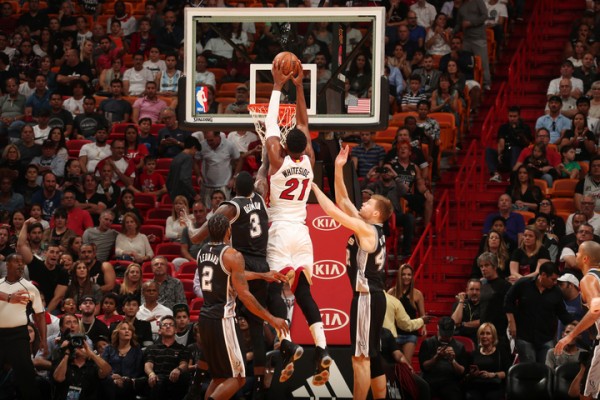 (Miami, FL) – Despite battling their way back from a 16-point first-half deficit, the Miami Heat were unable to find a way to topple the undefeated San Antonio Spurs, falling 106-99 at American Airlines Arena on Sunday night. The loss drops the Heat’s record to 1-2 on the young season, while the Spurs improve to 4-0.

The Spurs’ Kahwi Leonard served as his team’s lone scoring outlet down the stretch, notching 12 points and holding off a Miami squad that trailed by a single point at 94-93 with 4:07 left. Leonard did most of his damage at the foul line, hitting eight of his 10 free throws and also added a pair of field goals.

The Heat had held a pair of brief leads midway through the final period, but a couple of costly errors down the stretch were fatal to their hopes. Dion Waiters committed his sixth turnover of the game with 2:38 left and Miami trailing by two, and Leonard stole the ball away from Hassan Whiteside with 31.2 seconds left to effectively end the game.

Heat head coach Erik Spoelstra was impressed by the fight in taking San Antonio to the limit.

“It was sort of a better response than the other night,” Spoelstra said. “We were able to take a few punches and get back into this game and take a lead.”

Whiteside matched Leonard for game-high scoring honors with 27 points, while also grabbing 15 rebounds for a double-double. Goran Dragic added 25 points, while Justise Winslow chipped in with 18 and Tyler Johnson contributed 12.

During the contest, Whiteside grabbed his knee, causing some concern. However, after the game, Spoelstra stated that the problem was merely a cramp and added a little jab directed at Whiteside.

“I said the reason you got the cramp was probably because that’s the hardest you’ve played on the court,” Spoelstra said.

Despite the comment, Whiteside found a way to work in a promotional plug in his response:

On a more serious note, Whiteside took some solace in the fact that the team battled back from their double-digit deficit.

“To fight back from down 16…there are no moral victories, but this is a step in the right direction,” Whiteside said.

Despite the loss, Spoelstra saw some positive signs in the defeat.

“It’s not happening overnight, but I see progress, I see improvement,” Spoelstra said.

Miami will be back in action on Tuesday, hosting the Sacramento Kings in a game set to tip off just after 7:30 p.m. ET. That will precede a two-game road trip that begins on Thursday in Toronto before a Nov. 7 matchup at Oklahoma City.
[xyz-ihs snippet=”Responsive-ImagenText”]