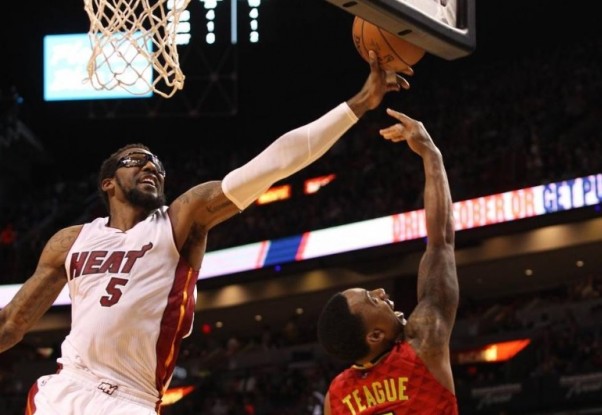 (Miami, FL) – Powered by stifling defense and control of the boards, the Miami Heat won their fourth straight game and moved into first place in the Southeast Division with a 105-87 win over the Atlanta Hawks on Sunday night at American Airlines Arena.

Miami is now one-half game ahead of Atlanta with a 27-21 record, with the Hawks having one more loss on their mark. The contest marked the Heat’s first home game after having played 11 of their last 12 contests on the road, and was their first win at home since January 4.

Veteran guard Dwyane Wade spoke about how the grind of that schedule had threatened the team’s season:

“It’s the toughest schedule I’ve had in my 13 years, this month,” Wade said. “About a week ago, everything looked real bleak.”

The victory also was the first four-game win streak of the season, which pleased Miami head coach Erik Spoelstra:

“Well, it was our fifth try at it,” Spoelstra said. “We wanted to do something different this time, since we’ve been in this position before and come out flat in those games.”

The Heat’s stifling defense resulted in Atlanta shooting just 39 percent on the night, with the visitors’ main problem coming in the backcourt. The Hawks’ guards shot a miserable 10-of-37 (27 percent) on the night. On the rebounding front, the Heat held a 47-31 advantage, including a 10-2 lead on the offensive side of the glass.

Spoelstra spoke about how the Heat achieved that balance:

“We’re trying to play with more pace and space, and the ball is moving,” Spolestra said. “More guys are involved.”

Chris Bosh led all scorers with 18 points and seven rebounds, while Luol Deng and Wade each chipped in with 17 for Miami. Center Amar’e Stoudemire contributed a double-double with 13 points and 12 rebounds.

“We fully believe Amare can be who he was in his twenties, in short bursts.” Spoelstra said. “He just gives you a highly decorated talent.”

Atlanta missed seven of their first eight shots, then made only three of their next 10 field goal attempts. That allowed the Heat to take a 27-17 advantage after one quarter. Miami continued to make things difficult for the Hawks in the second quarter, leading by as many as 20 at 45-25 after a Wade layup with 5:33 left in the half.

Though Atlanta was able to get the margin down to 13 at 47-34 by the end of the second quarter, they shot a miserable 24 percent during the quarter. The reason they were able to manage such a feat was because the Heat missed their last 10 field goal attempts of the quarter.

The Hawks then used a 24-11 run over much of the final 8:33 of the third period to reduce their deficit to just nine, after Miami had taken its biggest lead of the game with a pair of 22-point advantages. By the end of the quarter, the Heat held a 75-62 lead and Atlanta never got closer than 11 points the rest of the way.

Bosh said after the game that Miami showed some maturity when that Hawks’ run came:

“It was good to see that nobody got frustrated.”

The lone negative for the Heat was their 18 turnovers during the game.

The home cooking will once again be brief since the Heat go back on the road for a Tuesday night clash against the Houston Rockets that will tip off just after 8 p.m. ET. That will be followed by two more road contests.
[xyz-ihs snippet=”Responsive-Ad”]