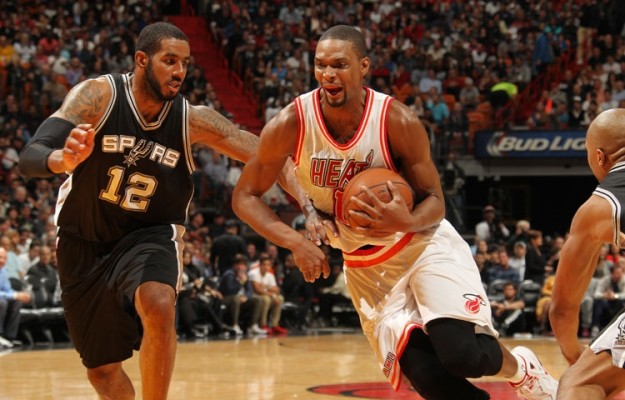 (Miami, FL) – Following a disappointing 100-93 loss to the Los Angeles Clippers on Sunday, the Miami Heat (29-24) head into the NBA All-Star break on a sour note after their lopsided 118-101 loss to the San Antonio Spurs (44-8) on Tuesday night at American Airlines Arena.

Despite being down by as many as seven points in the first half, the Spurs completely turned the tables on the Heat towards the end of the second quarter and entire second half. Miami trailed 54-47 at halftime and got to within a four-point deficit early in the third quarter, but San Antonio never looked back afterwards.

Spurs power forward LaMarcus Aldridge reminded fans why he was selected to the All-Star Game for the fifth year in a row, as the power forward went off for a game-high 28 points (10-of-16 from the field and a perfect 8-of-8 from the charity stripe), four rebounds and four assists.

“Just trying to be more active, you know, trying to make their outlooks tough,” Aldridge said after his team’s impressive victory. “I thought they had started out well so I thought guys picked it up.”

Although his scoring average is down this season compared to his eight-year tenure with the Portland Trail Blazers, Aldridge has found his confidence as of late. In his last seven games — all of which future Hall-of-Fame center Tim Duncan has missed because of a knee injury — Aldridge is averaging 24.6 points per game in that span.

“It’s a process, you know, it just took time,” Aldridge said. “I think I definitely feel more comfortable. Just get better every night.”

“We prefer it that way,” Green said. “Even if we weren’t under the radar, we’d still have to be focused and not pay attention to what goes on outside of what we’re doing.”

Heat shooting guard Dwyane Wade, who led his team in scoring with 20 points, continues to admire the Spurs’ consistent success in the NBA under head coach Gregg Popovich.

“That’s what we’re trying to build here,” Wade said during Monday’s practice. “When you’ve got young guys coming in, you’re trying to get everyone to know their role … When we’ve done that we’ve been successful, and when we get outside of that we haven’t. [The Spurs] are the consistency of that.”

Power forward Chris Bosh had 18 points and five rebounds for the Heat, but also squandered a whopping seven turnovers that proved very costly. Center Hassan Whiteside, who was ejected in the fourth quarter for elbowing Spurs center Boban Marjanovic, finished with 14 points, six rebounds and two blocked shots in only 25 minutes of play, while backup point guard Beno Udrih came off the bench to score 13 points and dish out three assists.

“We don’t condone that kind of play,” said Heat head coach Erik Spoelstra on Whiteside. “We’ve been through this with him before. It’s a disappointing play. That’s not a basketball play.”

Up next, the Heat will have nine days off before their next regular season game when they take on the Atlanta Hawks (30-24) on February 19th at Philips Arena. The contest, which is scheduled to tip off shortly after 8:00 pm ET, will be broadcast live locally on Fox Sports Sun.
[xyz-ihs snippet=”Responsive-Ad”]