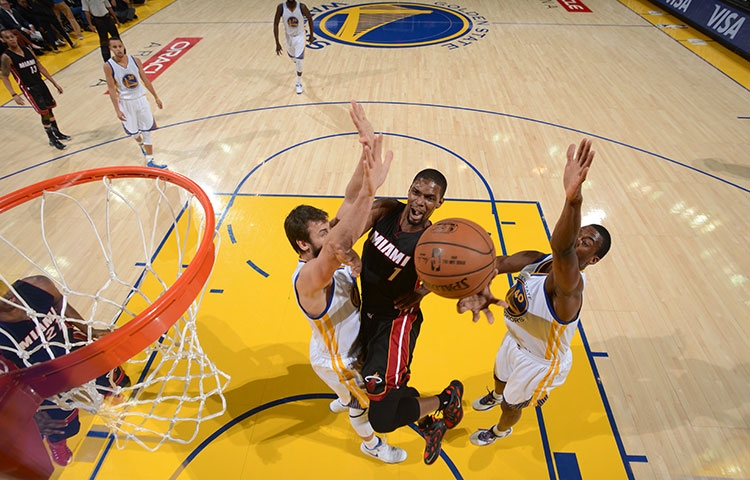 The Heat played from behind for almost the entire night as they struggled to defend Stephen Curry and the Warriors’ onslaught of perimeter shooting. Curry finished the game with 32 points on 11-of-19 shooting, including 7-of-10 from beyond the arc. He scored the first nine points of the game for Golden State.

Miami played without Dwyane Wade, who missed the game just a day after re-injuring his left hamstring versus the Los Angeles Lakers. As a result of Wade’s absence, Erik Spoelstra inserted Hassan Whiteside and Shabazz Napier into the starting lineup for the first time in their careers. Whiteside finished the game with 10 points, 12 rebounds and four blocks. Napier totaled 10 points and six assists in 32 minutes of action.

Spoelstra followed up on his decision to start Whiteside and Napier in Wade’s absence in the postgame presser:

“You never know what move to make when you have a guy out like Dwyane. He does so many things for us offensively. We thought the matchup would be a little bit better for Hassan when they’re at their biggest in combination with ‘Bazz and ‘Rio being solid the other night. So it didn’t work tonight, and we’ll see what we do the next game.”

The Heat were led by Chris Bosh‘s 26 points on 8-of-18 from the field, while Luol Deng posted 19 points and seven rebounds.

From the 5:31 mark of the first quarter until the end of the game, Golden State never trailed. Behind effective three-point shooting, fastbreak baskets and all-around contributions from the bench by the Warriors, Miami never stood a chance. The Warriors outscored the Heat’s bench, 41-17. Golden State also held the advantage in three-point shooting, going 13-29 (.448) from beyond the arc, while Miami converted on just 6-of-18 attempts (.333).

The closest the Heat would get in the fourth quarter was by cutting the deficit to nine points with nine minutes remaining. Miami would trail by as many as 17 points in the quarter before being put away by Golden State for good. The loss dropped the Heat to 2-2 on their current five-game road trip.

Bosh cited tempo as one of the main advantages for the Warriors in the loss:

“We weren’t dictating the tempo of the game. They were coming off and getting a lot of easy buckets, and not so much in the first quarter. I think it was the second quarter they got into a rhythm, pushing the lead to double digits and we were never able to recover.”

There simply weren’t too many positives to list for a squad that was clearly outmatched by the best team in the NBA. Further, making matters worse was the absence of the Heat’s best player in a back-to-back following a grind-it-out victory over the Lakers the prior night. The Warriors swept the season series versus the Heat, having previously defeated them, 114-97, on November 25 at American Airlines Arena.

Whiteside continued his effective play for the Heat, continuing to be a defensive presence in the paint. He did however struggle for the first time offensively in his past several games, as the Warriors utilized several defenders to defend Whiteside in the paint in order to slow him down. He finished just 5-of-10 from the field. The 7-foot center had gone 33-of-43 (77 percent) from the field over his past five games.

Also of note was Tyler Johnson’s NBA debut with 1:44 remaining in the fourth quarter. Johnson entered the game with the Heat down 101-86 just a day after signing a 10-day contract with the franchise. He scored the first points of his career when he was put on the free-throw line with 23 seconds remaining in the contest, converting on both free throws from the charity stripe.

The Heat will close out their road trip on Friday night when they visit Sleep Train Arena to play the Sacramento Kings. Tip-off is set for 10:00 PM EST and the game will be broadcast on Sun Sports.

Bosh stressed the importance of closing out the road trip with a victory:

“3-2 is not bad. I’ll take a 3-2 West Coast road trip. But that puts the emphasis on the game for Friday. We’re going to have to put this one behind us, move on to Friday and really try to get that one.”