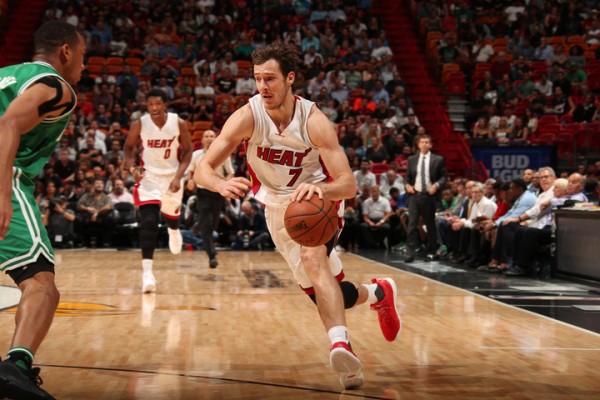 (Miami, FL) – A disastrous second quarter for the Miami Heat proved to be their undoing and helped the Boston Celtics come away with a 112-104 victory in Monday night action at American Airlines Arena.

During those fateful 12 minutes, Miami managed to connect on just 29 percent of their outside shots, while the Celtics were able to hit at a 60 percent rate on their 20 attempts during the quarter. That helped turn what had been a 21-19 Boston advantage after one period into a 48-31 halftime lead.

“We weren’t really well organized,” said Heat head coach Erik Spoelstra. “Guys were really trying to will it in that second quarter and that’s not how this team is really built to play. It has to be five-man team basketball, get organized, run in action. We play off different actions and share the ball.”

Miami was already playing short-handed, being without the services of three key players. Forward Justise Winslow sat out the game with a sore left wrist; Tyler Johnson was still on the mend from dental surgery; and Dion Waiters missed the game because of a groin injury.

That left it up to the duo of Goran Dragic and Hassan Whiteside to carry much of the offense, with the two combining for 52 points on the night and each notching a double-double. Dragic led all scorers with 27 points while handing out a whopping 17 assists. In the paint, Whiteside contributed 25 points and was once again a force on the boards with 17 rebounds.

“That is the Goran Dragic we know,” Spoelstra said. “It’s my responsibility to get him to that level more frequently, but he was downhill the majority of the second half. Getting into the paint, making the right plays, making the right reads. He’s connecting with Hassan.”

Despite his strong game, Dragic showed some frustration following the game:

“Give me 10 points and win the game. I’ll take that immediately,” Dragic said. “I’ve already proven in this league that I can score, so that doesn’t mean anything to me. We just need to continue to grow and get better, we have so many times when we’re not focused enough. In five minutes, we don’t know what we’re doing.”

The only other Heat players to reach double figures in scoring were Josh Richardson with 12 points and Rodney McGruder with 11. Wayne Ellington made his long-awaited debut by playing 26 minutes and scoring nine points, after only being expected to see about 15 minutes worth of action.

Miami would try to play catch-up for the remainder of the game after intermission, yet was only able to twice reduce their deficit to 10 points during the third quarter. One positive note was that the Heat’s outside shooting improved considerably during this period, thanks to their 67 percent field-goal shooting.

That third quarter also awakened what had been a chief drawback during the first half, when Miami missed all 12 of their 3-point shots. During the third, they were able to make 4-of-9 from long range, yet still managed to trail by 10 points at 83-73 by the end of the quarter.

In the final quarter, the Celtics managed to push their lead back up to 15 on multiple occasions. That managed to provide enough of a cushion to virtually eliminate any thought of a comeback by the Heat. During those final desperate moments, the closest that Miami could get was that final eight-point margin.

The loss drops the Heat to 5-12 on the year and their fourth loss in five games over an eight-day period. The Celtics improved to 10-7 for the season.

Miami now hits the road for three games against Western Conference squads. The first of those matchups sends them to the Mile High City on Wednesday night, where they’ll take on the Denver Nuggets. Tipoff for that contest is set for just after 9 p.m. ET.
[xyz-ihs snippet=”Responsive-ImagenText”]