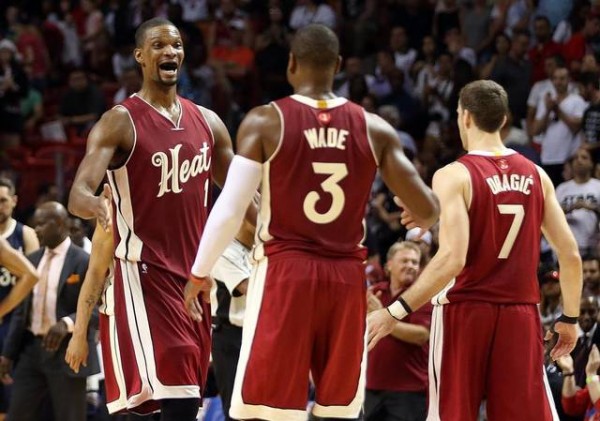 More than halfway through the season, the Miami Heat (29-24) find themselves fifth in the Eastern Conference. The starting lineup that didn’t play a game together last season — Goran Dragic, Dwyane Wade, Luol Deng, Chris Bosh and Hassan Whiteside — has played over 25 games together this season amidst injuries.

It hasn’t turned out how the Heat anticipated but it certainty hasn’t been a complete failure. While the team is far ahead of where they were last season at this time, the Heat still appear to be a mediocre team with flashes of excellence at best.

With the All-Star break behind them, the Heat need to answer these questions before they make a run for the playoffs. The unfortunate news of Chris Bosh’s potential season-ending injury scare has further disconnected the Heat from their high aspirations. These are three important questions the Heat need to assess heading out of the break if they want to have a successful second half of the season.

1. Are the Heat limiting Goran Dragic?

Last summer the Heat made a bold decision in signing the 29-year-old Dragic to a five-year, $85 million contract. Apart from committing to a player who they saw a 26-game playing sample from, the Heat practically gave Dragic the keys to the Heat offense up until the end of decade. The only problem is the Heat haven’t exactly let him use it.

Dragic has hardly looked like the All-NBA guard he was a couple years ago. The eighth-year point guard is averaging just 12.2 points and 5.3 assists a game, his lowest numbers in almost five years. With the return of Bosh and continued emergence of Whiteside, Dragic has seen his ability to impact the Heat minimized.

Usage rate, a potential misleading but often accurate stat shows just how much the Heat are limiting their starting point guard. Dragic’s usage rate of 20.0 ranks 111th in the NBA and 37th among point guards, behind rookies D’Angelo Russell and Bobby Portis, and ties with former Heat player Norris Cole, who the team traded in order to receive Dragic. Down the stretch of close games, Wade is the player with the ball the majority of the time. Dragic is nearly invisible and rarely utilized as a key player in those needed moments. Although head coach Erik Spoelstra has made recent tweaks to get Dragic more involved in the offense, the Heat’s third highest paid player gets overshadowed and tends to quickly defer to Bosh and Wade.

2. Do the Heat need to make a big trade?

It looks like the Heat have explored this option with reports indicating that the team has shopped Whiteside, Deng and more. On Tuesday, the team traded Chris Andersen and a couple of second-round picks as a part of a three-team deal that brought Brian Roberts to Miami. The exchange was mainly to alleviate tax issues for the Heat. The severity of the question above comes down to how big a fish the Heat need to pull before the deadline and what exactly they need.

The Heat rank 28th in the league in three-point percentage (32%) and dead last in bench scoring (25.5) per game. Gerald Green is the only bench player scoring in double-figures (10.1 points) but remains one of the most inconsistent players on the team. With Tyler Johnson potentially out for the season, the need for another scorer off the bench is almost mandatory. Acquiring a solid three-point shooter to complement the second-unit has been a priority as the team has looked at Omri Casspi, Rudy Gay, Kevin Martin and more.

With reports indicating that the Heat have attempted to bring in Dwight Howard and have discussed a trade to get Al Horford and Jeff Teague to Miami, you can’t help but think Pat Riley is trying to target All-Stars. It makes even more sense with Bosh’s season in jeopardy.

If Bosh is unable to play again this season, due to reccuring blood clots, the Heat may need to pull off a big trade more than ever. Whiteside, the league’s leading shot blocker, is a free agent this summer and will mostly likely receive max dollars elsewhere, something the Heat aren’t appealed to offering. The seven-footer has had an array of disciplinary problems and is currently suspended for elbowing Spurs’ big man Boban Marjanovic in a mini altercation last week. The lack of progress in the 26-year-old’s temper and impending free agency has made him hot trade bait in case he leaves in the offseason. Swapping Whiteside for a proven All-Star would propel the Heat closer to the postseason than most would think.

After Bosh was declared out for the remainder of the season last year, the Heat never got into a rhythm and sizzled out of the playoff race. Fortunately, the team was able to draft rookie Justise Winslow and find a shining light in a very dark season. This year that won’t be the case as the Heat have no first-round draft picks for at least another few seasons. Striving to go as far as they can, with or without Bosh, is a priority for the Heat and the best way to do that may have to be acquiring another star player.

3. Can the Heat actually win a championship?

Perhaps the question most fans don’t want to face, the reality of the Heat winning a championship this season appears to be getting smaller and smaller. At the end of the day no matter what trade you make or what player you sign, the ability to win a championship overshadows everything. Simmering with optimism at the beginning of a season with a healthy starting lineup and solid bench, injuries and inconsistency have quickly dominated the Heat’s 2015-2016 season.

While racking up big wins over the Cleveland Cavaliers and Oklahoma City Thunder, the Heat have fallen to lowly teams like the the Minnesota Timberwolves and Brookyln Nets. Falling behind early in games and fighting their way back to blowing big leads and collapsing in the second half has painted a picture of just how inconsistent this Heat team has been.

The Heat have lost at least one game to all eight of the Eastern Conference’s current playoff opponents from the Toronto Raptors to the Charlotte Hornets. Nothing the Heat have done this season has resembled dominance nor elite play. This Heat team, based off what they’ve shown, simply does not have what it takes to compete in a seven-game series with LeBron James and the Cavaliers or even the hot Raptors — assuming Bosh doesn’t make it back this season. Unless some of the league’s premiere teams lose their superstars and Wade plays like he’s 10 years younger, Heat fans will have to face the reality that this current roster has not demonstrated the characteristics of a top-tier team and is extremely unlikely to win a championship this season.
[xyz-ihs snippet=”Responsive-Ad”]