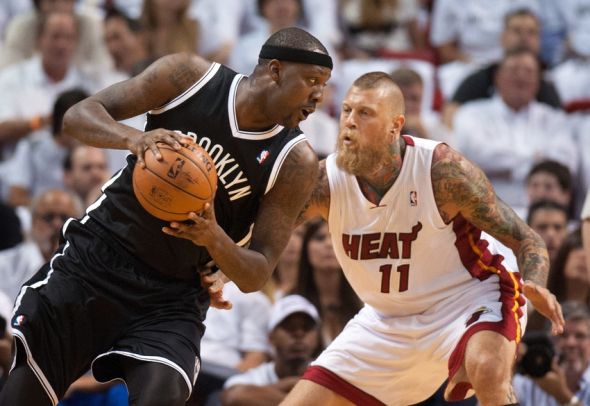 After several reports of the Miami Heat being interested in highly-coveted big man Emeka Okafor as well as the lengthy Ekpe Udoh, Barry Jackson of the Miami Herald has reported that Miami is now trying to add former Brooklyn Nets Center Andray Blatche or Jason Maxiell of the Detroit Pistons.

Among power rotation players, the Heat has shown interest in Emeka Okafor and has considered Ekpe Udoh. Preliminary inquiries were made on Andray Blatche and Jason Maxiell. Agent David Falk said he talked to the Heat about Elton Brand but that Brand is unlikely to end up here.

It has become evident now that the Heat are looking to add one more legitimate big man to solidify the front court, so that Chris Bosh can slide back into his natural power forward position.

Much like that of a Chris “Birdman” Andersen, Blatche is a nitty gritty blue-collar type of player that won’t be afraid to bang with big bodies inside the paint. Blatche averaged 11.2 points and 5.3 rebounds for the Nets last season and would be a solid addition to a Heat team that desperately needs more bodies inside.

Although a bit undersized, Maxiell is also a big body that could clog up space in the paint when necessary. Maxiell was the 26th overall pick by the Detroit Pistons back in 2005 and averaged 3.2 points and 2.5 rebounds per game for them last year. The reason Maxiell could be worth a hard look is because he may be the only player out of all the big men that is willing to sign for a veteran’s minimum deal.
[xyz-ihs snippet=”Responsive-ImagenText”]