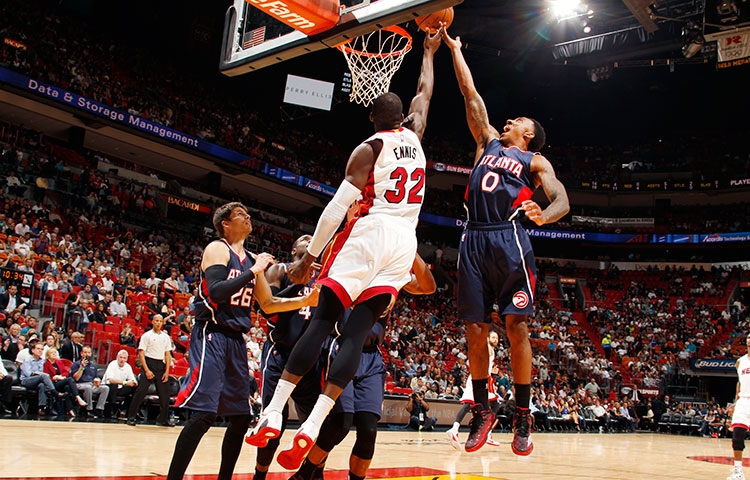 (Miami, FL) — The Miami Heat dropped their second straight loss against a potential Eastern Conference playoff opponent on Wednesday night as they fell to the Atlanta Hawks, 112-102.

Shooting guard Dwyane Wade, who ended the night with 28 points on 11-20 shooting to go along with seven assists said, “It’s a little frustrating whenever you a ballgame, even more when you lose at home. … The only thing we can do now is come back in tomorrow and try to figure out a way to right our wrong.”

The night was indeed frustrating as Miami shot 56% from the field in a home stand, yet still managed to lose by double digits. The Hawks dropped 12 three pointers on the night and was 48% from the land of beyond. Jeff Teague and Kyle Korver combined for six of those threes while scoring 45 of the Hawks’ 112 total points.

“We have to figure it out,” said Heat coach Erik Spoelstra, whose team is now .500 through 18 games. “We just have to get to work. That is the only solution. The solution is in the locker room and that’s what it’s about right now.”

One of the few bright spots for the white and red was center Chris Bosh, who finished the night with 27 points on a super efficient 9-12 from the field. Bosh also grabbed 11 rebounds and at times seemed to be the only one playing defense.

Whatever the issues are on the defensive end need to be fixed immediately as the Heat face a gargantuan five-game road trip, all of which feature Western Conference teams.

Notes: Miami was without starting point guard Norris Cole due to an illness and lost Luol Deng at halftime due to a bone bruise on his shooting hand.