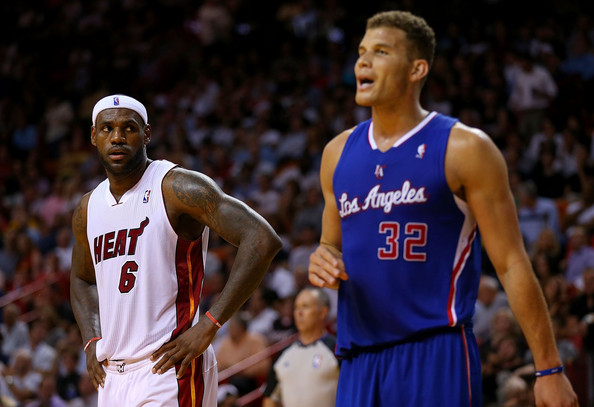 LeBron James is arguably the largest free agent in recent memory, commandeering the eyes and ears of countless NBA executives in the wake of opting out of the remaining two years of his deal. James’ larger-than-life move puts several teams on the clock, with each of them ready to pitch their biggest and most prominent ideas in hopes of acquiring the multiple-time Most Valuable Player.

However, could a cross-country trade for a human highlight reel and franchise stud be even larger than James himself?  The Los Angeles Clippers are considering offering Blake Griffin and either Matt Barnes or Jared Dudley in a sign-and-trade deal to the Miami Heat for LeBron James. The Clippers don’t have the salary cap space to sign James outright, but can vastly improve their chances at their first NBA championship by aligning James with his friend and All-Star point guard Chris Paul and flourishing rebound machine DeAndre Jordan. Meanwhile, the Heat allows itself to remain a premier threat in the Eastern Conference with a cornerstone like Griffin, provided Dwyane Wade and Chris Bosh are eager enough to return to South Beach to play alongside the four-time All-Star. While both teams would obviously prosper from such a colossal trade, there can be some downside for such a deal. Here are the pros and cons of a potential blockbuster swap of James and Griffin:

Why deny the obvious? Griffin fills arenas with his dynamic style of offensive basketball, as he is capable of dunking on and over anyone on a basketball court. At only 24 years of age, the sky remains the limit for Griffin, who is averaging a double-double over his career (21.4 points, 10.1 rebounds per game). Most of all, Griffin helps a frontcourt that needs offensive firepower and versatility. If Bosh was to take a pay cut and align himself with Griffin, Wade could be convinced to follow suit, as the inside presence of the duo will relieve any major burden he may face as a 20-point-a-night scorer. Wade and his declining knees could use all the help up front they could muster.

As great as Griffin is, no one is greater than James at this point. James makes any team at least five wins better with his all-around talent and ability to cover and play all five positions. Besides, when a player the caliber of James leads his team to a rare four straight NBA Finals appearances with two championships to boot, who should try to fix something that isn’t broken? James demands the Heat’s best efforts to keep him happy. The salary is of no primary importance to the two-time Finals MVP, as his endorsements dwarf his basketball income. Championships sit at the top of James’ to-do list. With that in mind, pay cuts can be made to bring in another star that is able to help shoulder some of James’ heavy load on the hardwood. Bosh and Wade would have a hard time finding a stronger substitute to play with than the game’s best player one more time, with the possibility of adding another all-star, who is willing to sacrifice dollars for true title dreams.

This is by far the toughest of the categories, but there can be some rationality in this one. James will be 30 by the end of the year and has a lot of miles on that 250-pound body of his. In addition, James’ reported issue with Heat Owner Micky Arison over Arison’s unwillingness to spend more money on the roster over the past year doesn’t quite help James’ confidence in another run at an NBA title in South Beach. James opted out of his contract not just for the Heat, but also for a plethora of teams who may have a better outlook towards a championship than an aging Heat roster. Add the fact that Wade and Bosh have yet to voice their commitments to the Heat for another year and the Heat has itself a conundrum like no other. Trading James would yield numerous quality offers in return, possibly including picks in this year’s draft that could turn to gems. The Cleveland Cavaliers, James’ hometown team, hold the No. 1 overall pick in Thursday’s draft. Moving that pick in a package deal for James can be a win-win down the road for both squads.

This very move could backfire badly if equal compensation is not made. The Cavaliers learned the hard way from watching James take his talents to South Beach and the Heat provide nothing in return to Cleveland. Since then, the Cavaliers have had the worst win percentage (.311) since losing their franchise star. True, Kyrie Irving has done his best to fill the void, but the Cavaliers don’t have much else beyond that. The possible deal for Griffin is an extremely enticing one, but there are things that James brings to the table that Griffin doesn’t. Griffin remains a work in progress as a night-in, night-out dominant performer, struggling to have a consistent jump shot when it’s needed the most. While Griffin did manage to keep his Clippers amongst the elite teams in the Western Conference despite Paul’s nagging injury, he didn’t manage to take the reins as the team’s best player and coveted leader when the season ended. James has done that on a regular basis, both in Cleveland and in Miami. Questions are abound as to whether or not Griffin can push a team over the top and into a place he’s never reached: the NBA Finals.