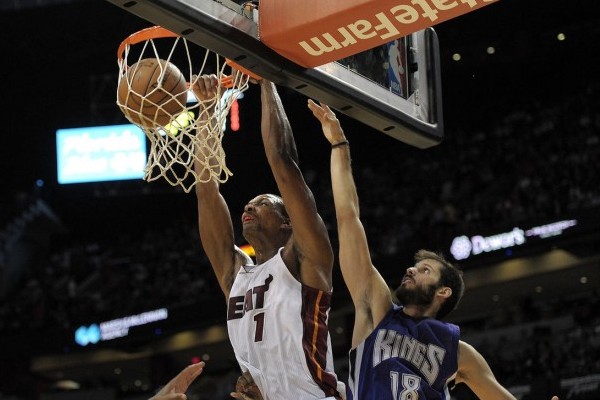 (Miami, FL) – Following a disappointing fourth-quarter letdown in their 103-91 home loss to the Minnesota Timberwolves on Tuesday night, the Miami Heat (7-4) held off a rally from the Sacramento Kings (4-9) on Thursday night en route to a 116-109 victory at American Airlines Arena.

On the young season, the 116 points amassed by the Heat was the most they’ve scored in a game this season, topping the 109 they scored in a win over the Houston Rockets.

Despite not having All-Star center DeMarcus Cousins, who was suspended one game for hitting Atlanta Hawks center Al Horford, the Kings refused to let the Heat pull away from them down the stretch.

“In this league, you have to find ways to win,” said Dwyane Wade after the game. “We’ve got a lot of things that we need to correct, but that’s what you get in season. We’re going to have a lot of even flow. After playing horrible last game as a team, we came out and got the job done.”

Wade led all scorers with 24 points (10-of-23 from the field) to go along with six assists, five boards and two steals on the night. Miami power forward Chris Bosh, who had averaged 18.1 points and 9.4 rebounds in 10 games this season heading into tonight’s contest, recorded a double-double with 23 points (8-of-12 shots made), 11 rebounds and four assists.

Off the bench, guard Tyler Johnson had 19 points, three assists and three boards, but it was power forward Amar’e Stoudemire who stole the show early in the game. In just eight minutes of action, Stoudemire scored 10 points (4-of-5 from the floor) and made both of his free throws.

“He was waiting his turn,” said Wade on Stoudemire. “A guy that works as hard as he does to get that opportunity to come in and give us some big minutes early in the game, you’re happy for him. It’s just a testament to his hard work.”

Kings point guard Rajon Rondo had an NBA season-high 18 assists to go along with 14 points and nine rebounds, coming up just one board short of a triple-double. Rondo, who has already accomplished the feat four times this season, is averaging 14.2 points, 14.2 assists and 9.8 rebounds in his last five games.

Shooting guard Marco Belinelli, who gave the Heat problems all night with his shooting, led the Kings in scoring with 23 points off the bench, including 5-of-10 from behind the arc and 8-of-9 from the free throw line.

Sacramento suffered another blow with 5:18 left in the third quarter as All-Star small forward Rudy Gay hurt his left shoulder on a play under the basket, as Heat rookie Justice Winslow blocked his shot. Gay played 25 minutes before his early exit and recorded a double-double with 13 points and 12 rebounds.

Up next, the Heat will host the winless Philadelphia 76ers (0-12) in the sixth game of their seven-game homestand on Saturday night at American Airlines Arena. The matchup, which is scheduled to tip off shortly after 8:00 pm ET, will be broadcast on Fox Sports Sun.
[xyz-ihs snippet=”Responsive-Ad”]