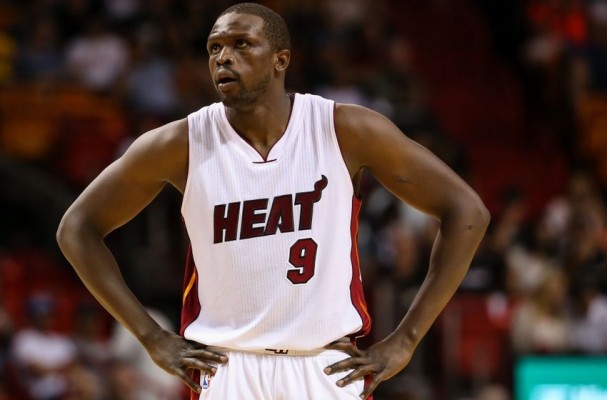 It’s looking more and more like Luol Deng will miss his third consecutive game on Monday night versus the Boston Celtics.

Ira Winderman of The Sun Sentinel reports that the Miami Heat likely won’t have Deng (hamstring) or Amar’e Stoudemire (illness) for their Monday night matchup versus the Celtics at American Airlines Arena:

So it looks like Heat will have neither Luol Deng (hamstring) nor Amar’e Stoudemire (illness) Monday against the Celtics.

The last time Deng played was on Monday night in a 95-78 victory over the New York Knicks. In regards to Stoudemire, the veteran big man has appeared in just two games for the Heat this season, with his last appearance coming in a 116-109 victory over the Sacramento Kings on November 19th.

Deng participated in the team’s practice on Sunday, but head coach Erik Spoelstra stated that all of his work was done to the side. Spoelstra also stressed that he doesn’t see the small forward being ready for Monday’s game:

Spo on Deng’s status for tomorrow night vs the Celtics: “I don’t anticipate him being ready.”

With Deng sidelined once again, Gerald Green will start in his place at small forward for the third straight contest. Green led the Heat in scoring in their 97-78 rout of the Knicks on Friday night when he scored 25 points.
[xyz-ihs snippet=”Responsive-Ad”]