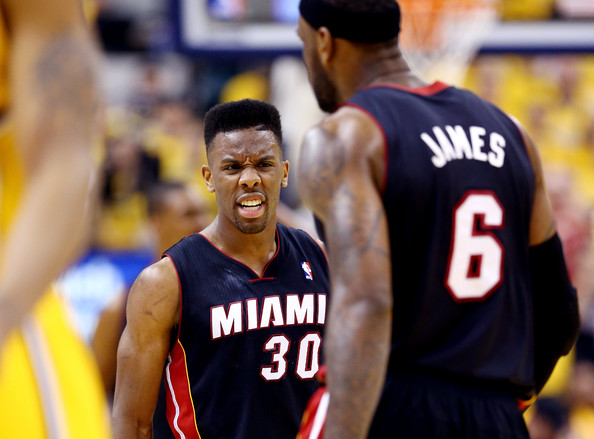 It’s safe to say he’s never going to be MVP, but never say he doesn’t hustle, and never say he’s not an integral part of Miami’s three-peat hopes. In fact, you could probably say he’s the Heat’s unsung hero, but before you say, “How can a guy average six points a game and be an unsung hero?” Hear me out.

Ever since Cole joined the Heat as a feisty rookie who always played with a chip on shoulder, Norris has played the role of wily veteran despite being a neophyte. When you play with a pair of sprinters like Dwyane Wade and LeBron James, it helps to have someone who can keep up, and Cole has always been able to do so—in more ways than one.

Yes, he can play at a high level, but he’s also a very cerebral player who makes up for his lack of size.

Cole is the perfect energizer. He’s a shade under 6’3”, but he plays like he’s 7’1”. He’s unrelenting when he takes it to the rack, and although a lot of times his shots end up swatted, his courage often pays off when he converts tough layups in traffic. He’s a great floormate in transition, and he’s evolved from midrange jumpshooter and sometimes-scorer into a legitimate marksman from behind the arc.

When Cole entered the league in 2011, he finished his rookie season shooting a shade under 28-percent from behind the three-point line. Fast-forward three years, and Cole is shooting a highly-efficient 34-percent from deep. But you can’t look at the numbers to fully appreciate what he’s doing with his shooting. He’s converting shots in transition; he’s converting shots in rhythm off of transition opportunities, and most of all, a lot of these attempts are deep and difficult. The man has become a full-fledged ice-cold marksman, and he plays defense like a rabid pitbull. Plain and simple, Norris Cole is tailor-made for Miami’s system.

This year in the postseason, Norris is only averaging around 6 points per game. It doesn’t sound like much on paper, considering you can only expect him to give you two three-pointers a game at the most, but you’re also getting a lot of hustle, and other little things that don’t show up on the box score.

Another contribution of his, which goes mostly unmentioned, is the fact he’s the perfect motivator for his fellow Heat point guard, Mario Chalmers. Chalmers is the de facto starter, but there have been instances where he’s struggled. As soon as Coach Spoelstra senses ‘Rio is in one of his ruts, Cole gets subbed into the game.

It might not be a huge storyline, but best believe that an elite level competitor like Chalmers isn’t going to sit on the bench and enjoy the fact his backup is outplaying him. Cole not only pushes the entire team to play harder and tougher, but it forces Chalmers to step it up as well. Case in point: Game 3 of the ongoing Eastern Conference Finals. Norris got some great early minutes, and he ended up shooting a highly efficient 4-of-6 from the field with nine points. The man who made the decision to put him in—Coach Spoelstra—had this to say in regards to his most recent contributions. “[Norris] gave us a different element of speed, quickness, somebody who could put the ball on the floor and be aggressive and extend our defense,” Spoelstra said. “Boy, we’ve needed those minutes.” (Per USAToday.com) LeBron James admired his performance as well. “[Cole] makes his mark defensively,” James said. “He makes us all step up our game defensively. Offensively, whatever he gives us is always extra for us. He attacks the rim, gets himself looks, gets our guys great looks and it’s great to have him.” Like LeBron said, he’s just an auxiliary asset, but anything he provides is just the icing on the cake.

He might not ever play big-time minutes, but he plays big-time with the minutes he’s given. Norris Cole’s timely contributions can’t be lauded enough, and it’s exactly why he’s Miami’s unsung hero off the bench. Assuming Miami’s bid for three rings in a row is a success, it’s safe to bet Norris Cole had a big part of it.