The Greatest Small Forward of All-Time: Bird or James? 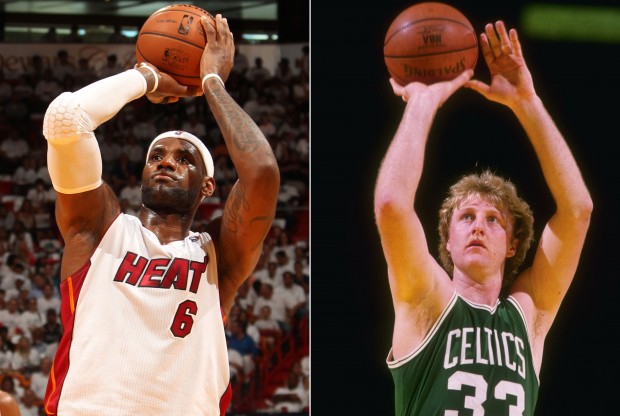 Barber shops, local bars, conversations after a pick-up game. As fans, we love to compare the legendary players of past eras with the stars of today. Deemed the “Chosen One” since his arrival into the league in 2003 as an 18-year old phenom, LeBron James has oft been compared to the likes of Magic Johnson, Kobe Bryant and most notably, Michael Jordan.

However, when it comes to comparing players that played the same position and are nearly the same size, the most apparent comparison is between James and the great Larry Bird, who is historically attributed as the best small forward of all-time.

But, IS he the best small forward of all-time?

Let us dive into the awards between Bird and James first. Breaking down their accomplishments in the first ten years of their career, the number of accolades is nearly identical. Through ten years, both players were nine-time all-stars, and two-time NBA Finals MVP. Bird edges out James 3-2 in NBA Championships, while James has earned one more regular season MVPs.

With the recent defeat of the Indiana Pacers in the Eastern Conference Finals, James and the Miami Heat have moved on to the NBA Finals for the fourth straight year with a chance to three-peat as champions, something Bird was never able to accomplish.

Now, Bird’s style was definitely different from James’. He was a throwback style player, unable to out run or jump his competition, but he used his notorious trash talking to aggravate his opponents. He had a certain swagger, a certain level of confidence (some saw it as arrogance) about himself that allowed his ability to shoot, pass and rebound to shine.

An unmatched tenacity, an unbelievably smooth shot from anywhere on the court as well as the vision and savvy to weasel his way in the paint, Bird was an all-around competitor who found a way to win regardless of the cost.

As a rookie, Bird beat out Magic Johnson for the rookie of the year award, averaging 21 points, 10 rebounds and five assists per game; a sense of redemption after Bird’s Indiana State Sycamores lost the NCAA Championship to Johnson’s Michigan State Spartans.

“Larry Bird was so good it was frightening,” Johnson said about his longtime rival.

Ranking as one of the all-time greatest shooters in NBA history, Bird was in the top ten in 3-point percentage eight times in his career, where James has yet to eclipse that mark. Another triumph that James will probably never accomplish is averaging a shooting percentage above 50-percent field goals, 40-percent for three-pointers and 90-perfect from the free throw line. Bird reached the elite 50-40-90 club twice in his career with the only other player, Steve Nash, to accomplish it more than once.

Bird’s career only lasted 13 seasons and was cut shorter than most legends due to an ailing back. He first hurt his back in 1985, attempting to build a driveway at his mother’s house.  In 1991, Bird had back surgery to attempt to realign his spine but it was only a temporary fix. Doctors said he had lost the structural stability in his spine where the back would slip into abnormal positions just to gain stability.

Bird stated, “Every time I played I wondered if I was going to be in a wheelchair. Would I ever be able to walk on the beach or hold my kids?”

Despite the chronic injuries that plagued his career in the final years, Bird still averaged 20.2 points, 6.8 assists and 9.6 rebounds per game in 1991, his final season, proving the toughness of his nature. For the entirety of his career, Bird averaged 24.3 points, 10 rebounds and 6.3 assists per game. Bird’s 10 rebound per game average is among the highest for any small forward in league history. Comparably, James has averaged 27.5 points 6.9 assists and 7.2 rebounds per game, holding a slight edge in points.

Throughout his career, James has carried his team to an elite level. In 2007, while with the Cleveland Cavaliers, James, 22-years old at the time, scored a playoff-high 48 points, which included the team’s final 25 points to defeat the powerhouse Detroit Pistons 109-107 in double overtime of the Eastern Conference Finals. That same year James led a squad with the likes of Sasha Pavlovic, Drew Gooden, Zydrunas Ilkgauskas and Larry Hughes to the NBA Finals before being swept by the San Antonio Spurs’ own “Big Three”.

“I do think he can be better than Michael (Jordan),” Hall of Famer Charles Barkley said about James. “I thought I would never compare somebody to Michael Jordan but this guy LeBron James, he does everything well.”

Drawing back to the comparison to Bird; through 11 seasons, James has recorded 37 triple-doubles where Bird ranks fifth all-time with 59 regular season triple-doubles. Despite having at least six years left of playing at an elite level, barring any serious injury, it is a long shot that James could ever reach Bird’s mark after notching just one triple-double in the 2013-2014season.

“He was a basketball genius, he would be a step ahead; a thought ahead,” Julius Erving said about Bird. “He played the game like a chess match.”

Bird and James have one thing in common that is often overlooked. They both came from humble beginnings as children, deprived of the simple luxuries most kids take granted of. Bird was raised in a small, poor rural area in Southern Indiana known as “French Lick” and eventually earned the nickname “The Hick from French Lick.”

James grew up in Akron, Ohio in an area laced with drugs and crime, raised by a single mother, Gloria James, who bounced around from job to job trying to make ends meet. Like Bird, James found refuge and peace on the basketball court from a young age. With their rough childhoods, these two NBA greats worked harder than anyone at their craft in order to better their life.

“The thing that I had on the court that I didn’t have off was security,” James said. “I’ve always said it’s home away from home for me.”

In game one against the Charlotte Bobcats in the opening round of this year’s playoffs, James passed Bird for eighth on the playoff all-time scoring list. Despite the feat, it is improbable that James will ever match the countless buzzer-beaters that the clutch Bird racked up. James will most undoubtedly surpass Bird for most points scored. For his career, Bird averaged 24.3 points per game, in which two seasons late in his career, he only managed to score 19.3 and 19.4 per game. On the contrary, James has averaged 27.5 points per game with his lowest average scoring season being his rookie campaign where he averaged 20.9 points per game with the Cleveland Cavaliers.

“I always said ‘boy I wish I had his speed,’” Bird said about James. “Kobe was always my favorite since he came out but LeBron is by far the best in the league.”

Although he may have the most elite skill set, the rarest combination of size and speed, the greatest soaring ability to throw down a dunk and the vision to make any pass, “King James” is still a work in progress when compared to the great “Larry Legend”.

“I think he’s one of the greatest to ever play our game,” Bird said in admiration of James. “If you are a basketball fan you have to sit back and go wow, how does he do that?”

With James naming Bird to his all-time top four players, the respect for each of these superstars is mutual, and James possesses a realistic chance to pass Bird in points scored and championships won. Despite Mark Jackson’s expert opinion, this debate won’t carry any weight until James’ illustrious career is finally over and Larry Legend still reigns supreme.

So who do you think, Bird or James? Leave your comments below.