Now that we’ve dissected and analyzed the best dunkers in Miami Heat history, let’s get down to the best shooters who have ever suited up for the red and black. Shooting is a calculated art form that requires a lot of practice and repetition to master the technique. Once the form and range is embedded, just imagine adding some of the best athletes in the world jumping at you with a hand in your face and the shot-clock winding down.

Some of the players on this list played a short time with the Heat but have hit some of the biggest shots in the franchise’s history. Several shooters on the list have also won the three-point contest where they have competed against the best the league has to offer. So without further ado, here are the 10 greatest three-point shooters in franchise history. 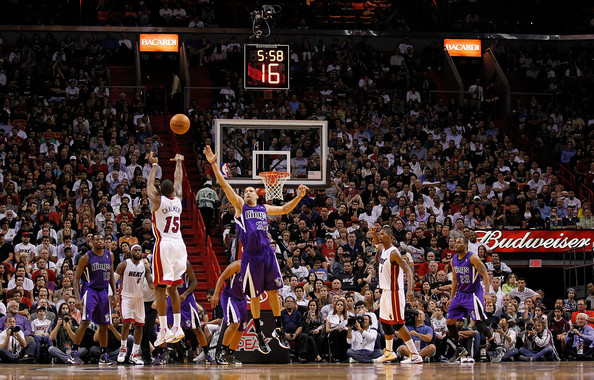 Despite “Super Mario” hitting a massive shooting slump in the 2014 playoffs, Chalmers has proven on several occasions that he is capable of making big shots. Selected by the Minnesota Timberwolves in the second round (34th overall) of the 2008 draft out of Kansas, the Heat acquired his rights in a trade. Chalmers is fourth all-time in Heat history with 622 three-pointers made (and counting) and also shares the single-game record for threes made in a game (10).