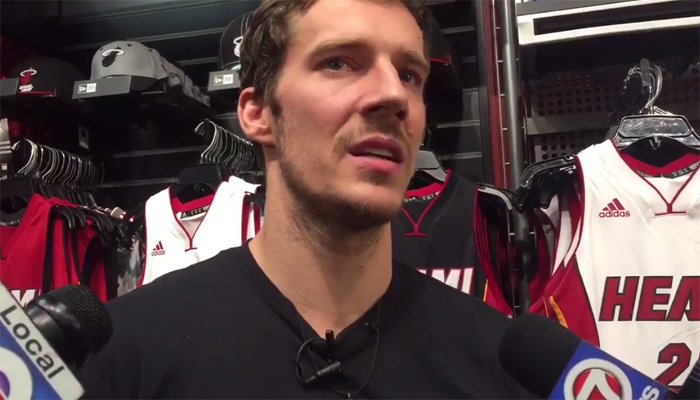 A lot has changed for the Miami Heat in the past few months.

Face of the franchise Dwyane Wade along with a few other starters departed South Beach and Chris Bosh‘s return plans look extremely slim.

Consequently, the team has changed dramatically and one player whose position will change significantly this upcoming season is Goran Dragic.

The point guard spoke candidly Saturday afternoon, between signing autographs and taking photos with fans at the Heat store inside Dolphin Mall, about the teams’s free-agency moves and the upcoming season.

In a video tweet shared by the Miami Herald’s Manny Navarro, you can hear the 30-year-old describe everything in detail.

Over the past couple of seasons, it was set in stone that Dragic would have to defer to Wade or Bosh. However, the guard’s tone has changed and he’s ready to lead this team alongside Hassan Whiteside.

Dragic made the All-NBA Third Team in 2014 and has shown flashes of All-Star potential in his tenure with the Heat. Last season, the veteran dealt with his wife’s difficult pregnancy and came into training camp out of shape.

During his year’s training camp, Dragic is coming in with neither of those issues and will get back to run his style of offense. As heard in the video, the guard is looking forward to playing with a young team “that can run all day.”

If the Slovenian speedster gets to run his style of play, he can get back to elite point guard status in this league. It wasn’t too long ago when Dragic was putting up over 20 points a game. After Bosh went down midway through the season, the offense was handed over to Dragic and the team thrived.

This season, the team will be starting off with the offense in Dragic’s hands. They’ll look to the guard to lead their team and start things off strong in 2016-17
[xyz-ihs snippet=”Responsive-ImagenText”]