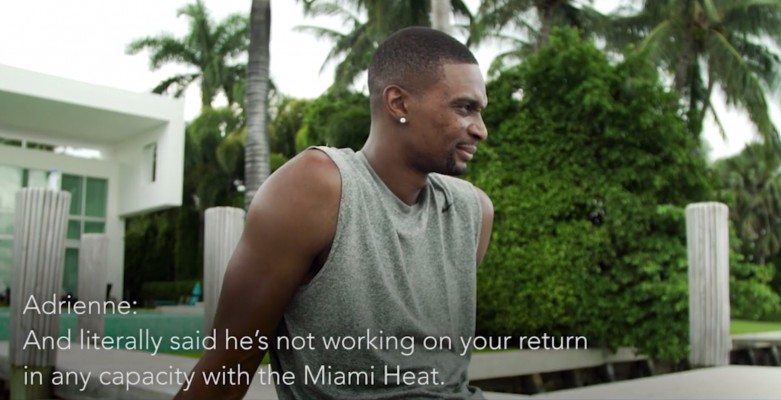 A sad stretch in South Florida sports officially took a turn for the worse on Friday with Miami Heat forward Chris Bosh declaring that his time with the team was up and venting out some frustration.

After Bosh failed a physical last week, Heat president Pat Riley announced Monday that the team wasn’t working towards his return and that the big man’s career with the Heat was probably over. Still, fans probably wanted to hear what Bosh had to say himself.

The two-time champion spoke out Friday, candidly voicing out his displeasure with the situation. Bosh spoke through his UNINTERRUPTED segment, “Bosh Rebuilt,” on the comments Riley made and his future with the team.

The 13-year veteran admitted his career with the Heat was, in fact, over. However, he did not say the same about his NBA career.

“I guess my career in Miami is done. My career is not done.” said the forward who has played the last six years for the Heat. “That does not mean my NBA career is over. There’s 29 other teams.

Those are strong words from a light-hearted guy. Yet, Bosh went on even further, taking shots at Riley, who he claimed didn’t call him or text him about the development. Like us, Bosh heard the news through the media.

Bosh said he found out Riley would not bring him back through the media. "I didn't get a call or a text or anything like that."

The secondary audio of Bosh's latest video: "If you think you're going to turn my medical issue into cap space, think again."

To officially put a cap on his time being over with the Heat, the 32-year-old wrote a letter to the fans in Miami. In it, he touched on the days of the Big 3, the state of the current team and his love for the fans.
[xyz-ihs snippet=”Responsive-Ad”]