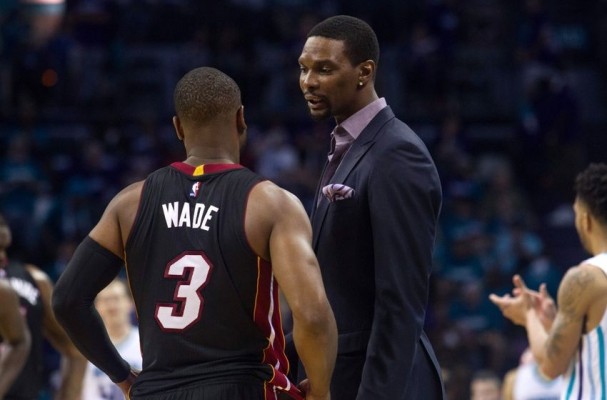 The Miami Heat may be playing exceptional basketball in his absence, but that doesn’t mean power forward Chris Bosh is content with sitting on the bench.

According to Dan Le Batard of ESPN Radio (via Jason Lieser of the Palm Beach Post), the 6’11” big man is pushing for the Heat to allow him to return to the court from his blood clots ailment.

Le Batard paints the situation as “tension happening.” Here is his full quote in regards to the two sides not coming to an agreement on allowing Bosh’s return:

“This is complicated and it’s not great. They are not in agreement here. The two sides—This runs the risk of getting problematic here at a bad time, because Chris Bosh wants on the court… It’s obvious that Chris Bosh wants on the court and that he’s pressuring the organization…and that his wife is pressuring the organization. They were wearing the #BringBoshBack shirts (Sunday). There is a tension happening.”

The 32-year-old forward hasn’t played in an NBA game since February 9th prior to the All-Star Game. It was during All-Star Weekend for the second straight year that it was discovered that Bosh was struggling with another blood clots ailment.

Although this ailment is not considered as serious as the last one, the Heat are fearing the worst if Bosh takes the court again—such as death:

“I don’t know exactly what to believe here, OK, but I do trust the organization and I trust the people in the organization who tell me things because I’ve never been lied to by them about much of anything. They’re telling me that they’re protecting him from him, but he doesn’t feel any symptoms. This doesn’t feel like the last time. All the doctors the Heat are talking to are saying, and they’re the foremost authorities on this stuff, ‘Hey, a second recurrence of a blood clot situation could be catastrophic, where you’ve got a death on the court.’”

While the Heat are obviously a more dynamic team with Bosh on the court, the most important thing is his health. Although it is true that his blood clots setback was a lot more serious a year prior, he didn’t suit up a single time after the All-Star break in 2014-15. There is little doubt Miami is taking every precautionary measure necessary to ensure that Bosh is 100 percent cleared before they allow him to play again.

The Heat will begin their second-round playoff series versus the Toronto Raptors on Tuesday night. If Miami engages in a long series with the Raptors, or even advances to the Eastern Conference Finals, it should be interesting to see if the organization allows the 11-time All-Star to return.
[xyz-ihs snippet=”Responsive-Ad”]