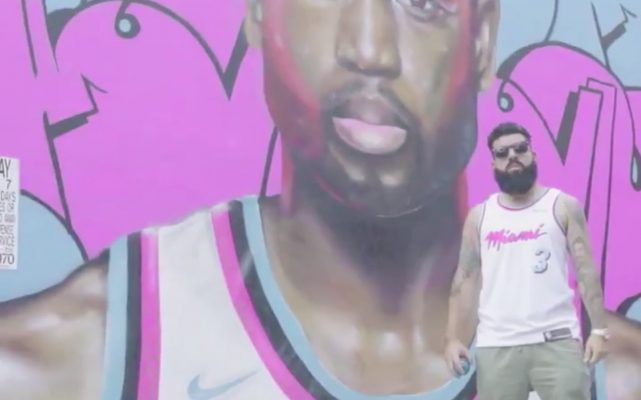 Dwyane Wade will be greeted back for “one last dance” in Miami with a brand new mural honoring his Heat career.

The mural by Miami-based artist Disem is on full display in Little Havana on the north wall of the Morphe Fitness and Wellness Spa, where it was commissioned and paid for by owner Roberto Santamarina.

#wip #Repost @primossmokeshop with @get_repost ・・・ My boy @disem305 rocking @dwyanewade for the welcoming of his comeback! . . Feel free to repost and tag him on it as well! . . #miamiheat #dwade #comeback #welcomeback #beastmode #basketball #bball #staylitwithus #primossmokeshop #headshop #littlehavanamiami #heatnation

No patience. So I couldn’t wait for a day time flik. Been working on this one on my free time and I don’t have much of it so it’s taken longer than expected. @dwyanewade thanks for 13 1/2 years of hard work n love towards our city. Give it a few more! #wadecounty #dism #disem #heatnation

The mural depicts Wade in a Heat “Vice” jersey surrounded by a sea of pink and teal.

“Wade’s definitely… I’m a huge Heat fan, so he’s definitely had a huge impact on me as an artist, as a fan and as a Miamian.”

Now THAT is a work of art!

You can find this @DwyaneWade #HEATVICE mural in the heart of Miami's Little Havana neighborhood ? pic.twitter.com/LC2zgJ2RHS

Disem began to work on the mural in February when the Cleveland Cavaliers sent Flash back to the Heat.

Disem said that he decided to paint the mural to commemorate Wade’s return to South Beach once the trade was finalized.

“When people see this wall, I want them to realize that this is a man who has put in a lot of work for this city in a lot of different ways,” he explained. “I just kind of wanted to give back to somebody who has given so much to this city and let him know that he’s appreciated.“

Wade re-signed with the Heat Sunday, returning for his 16th NBA season.

The future Hall of Famer has led the Heat to three NBA championships while earning himself 12 All-Star appearances.
[xyz-ihs snippet=”HN-300×250-TextnImage”]