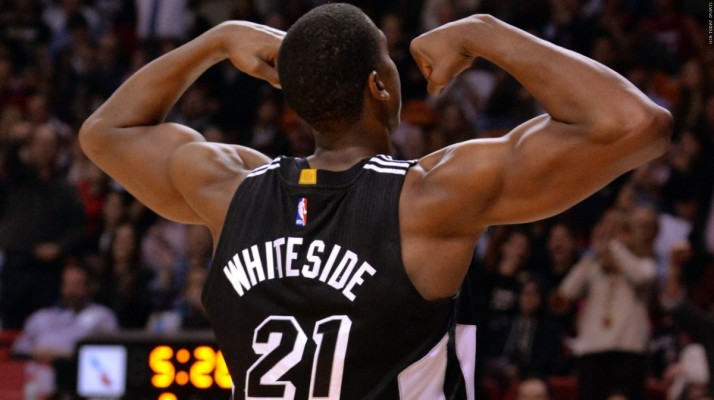 It is now set in stone that Hassan Whiteside will earn every dollar of his $981,348 salary for next season.

The Miami Heat have officially guaranteed Whiteside’s salary for the 2015-16 season. The team had a December 1st deadline to guarantee his full salary for the season, but decided to make the decision several weeks before training camp begins.

Instead of making Hassan Whiteside wait until 12/1/15 for his contract to fully guaranteed, Miami amended to lock it in now @BBallInsiders

Ira Winderman of The Sun Sentinel goes into detail regarding Whiteside’s guarantee dates before his salary became fully guaranteed:

“Whiteside initially signed a contract last season that provided for staggered guarantee dates for his $981,348 salary for 2015-16. He was guaranteed 25 percent of his salary on Aug. 1. The initial terms of his contract had him receiving a 50-percent guarantee if still on the team on opening night and then a full guarantee if on the roster on Dec. 1.”

The 26-year-old was one of the biggest surprises of the 2014-15 NBA season. Originally signed as a free agent in late November, the 7-foot center played his way into the rotation by January and emerged as one of the league’s top two-way players.

Despite playing in just 48 games and making 32 starts, he averaged 11.8 points, 10.0 rebounds and 2.6 blocks per game while shooting 62.8 percent from the field. He ended up finishing fourth in the Most Improved Player Award voting.

Whiteside will be a free agent during the summer of 2016, and the Heat will have to make roster moves to clear up cap space in order to re-sign the young center.
[xyz-ihs snippet=”Responsive-Ad”]