Report: Ray Allen Has Offer on Table to Return to Miami Heat 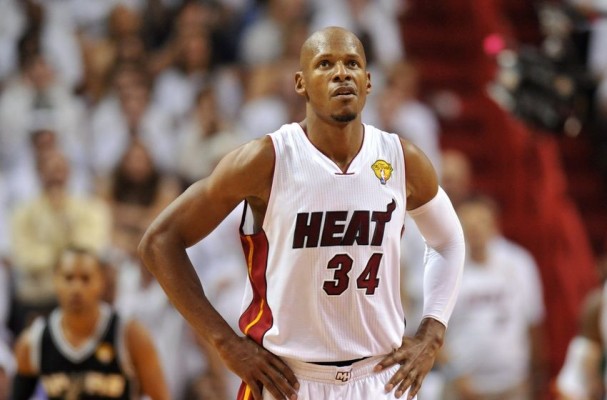 The Miami Heat are a desperate team and a new report on Monday illustrates just how desperate they really are.

According to Ethan J. Skolnick of The Miami Herald, the Heat have a standing offer for Ray Allen to return to the team. Allen has not played in the NBA since the conclusion of the 2014 NBA Finals, when the Heat lost in five games to the San Antonio Spurs.

The 40-year-old Allen was extremely displeased with his role in his last season with the team, according to Skolnick:

“This shouldn’t be all that surprising, if you were aware of his frustration during his final season in Miami, the one that ended with a five-game Finals loss to the Spurs; he made that frustration, about everything from scheduling to rotations, well enough known to Heat teammates, coaches and officials, that it has been frequently relayed to reporters (like this one) since.”

It’s no secret the Heat are struggling. Although it’s only halfway through the season, Miami has just the eighth-best record in the Eastern Conference at 23-21. While the team has many issues, one of their weaknesses is their three-point shooting—the Heat rank 26th in made three-pointers and 27th in three-point percentage.

Skolnick makes sure to conclude his report by mentioning that those close to Allen believe he’ll remain retired.

It’s hard to envision Allen returning just to help a Heat squad barely make it to the postseason. Unless Pat Riley has something up his sleeve, the safe bet is for Allen to stay retired.
[xyz-ihs snippet=”Responsive-Ad”]