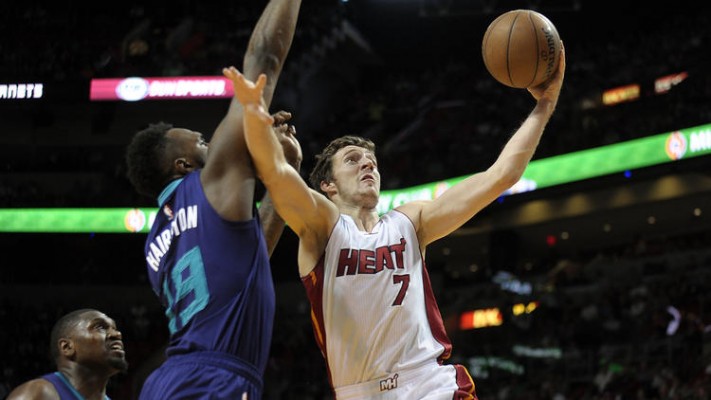 (Miami, FL) — With their playoff hopes on the line and backs against the wall on Tuesday night, the Miami Heat (35-43) snapped a four-game losing streak in a crucial 105-100 victory over the Charlotte Hornets (33-44) at American Airlines Arena. Goran Dragic was a big part of Miami’s win, as the point guard was extremely clutch down the stretch.

“We were talking before the game that this is a playoff game number seven,” said Dragic after the game. “Tonight was a must-win for us and we’re really happy that we got that game, but we’ve still got four games. Hopefully we’re still going to play like that.”

Dragic led the Heat with 28 points, his highest point total as a member of the team, while he added five assists and four rebounds. In the fourth quarter, Dragic stepped up immensely to score 11 of his 28 points in the final 12 minutes. With Miami’s next three games being held at home, Dragic is confident in himself and his teammates going forward.

“The fans are unbelievable at supporting us,” said Dragic. “We feel much more comfortable that we are sleeping in our beds, so that helps a lot. We feel like that if we play like this as we did tonight, especially at the defensive end, it is really tough to stop us.”

Dwyane Wade had 19 points, five assists and three rebounds, while Hassan Whiteside finished with 12 points (six of eight from the field) and eight rebounds for Miami in their highly important win.

“It’s pretty obvious what we’re playing for,” said Heat head coach Erik Spoelstra after his team’s victory. “Once you get into the heat of competition, you have to focus on the task at hand.”

Luol Deng, who had a strong game with 21 points and six rebounds on Tuesday night, knows Miami has a difficult stretch ahead of them.

“You want to be in the playoffs, whether you are eighth seed, the seventh seed or the sixth seed.” said Deng. “You are playing a good team in the first round.”

Hornets guard Gerald Henderson, who led all scorers with 29 points on the evening, saw his team come up just short for their fifth consecutive road loss. Point guard Kemba Walker had a good night for Charlotte, as he contributed 17 points, four assists, four rebounds and three steals while point guard Mo Williams came off the bench for 15 points, five rebounds and four assists.

Up next on their schedule, the Heat will host the Chicago Bulls (46-31) in a showdown with the Eastern Conference’s current third seed. The contest is slated to tip off shortly after 8:00 pm ET at American Airlines Arena and will be broadcast nationally on TNT.
[xyz-ihs snippet=”Responsive-Ad”]