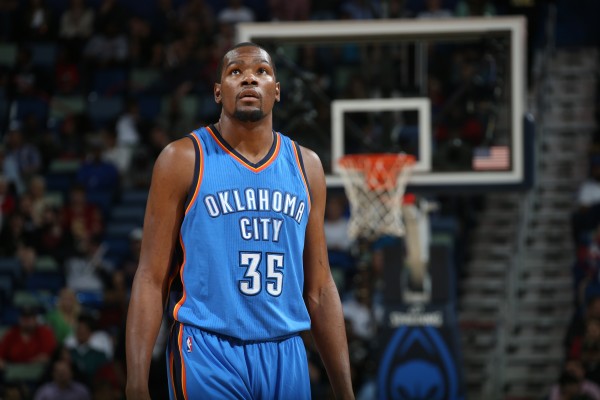 The Miami Heat have had a track record of going after big-name free agents ever since Pat Riley joined the organization two decades ago.

With Kevin Durant being a free agent during the 2016 offseason, Zach Lowe of Grantland expects Riley to make yet another run at a big-name superstar during free agency:

“One star changes everything, and Riley gets stars. Next summer, Miami could open up nearly $40 million in cap room, and as much as $45 million if it moves McRoberts for extra cap space. That’s a ton, but if Whiteside has even a solid season, it’s not enough to bring back both Whiteside and Wade while signing an outside star; the Heat will not have full Bird rights on Whiteside, meaning they will have to dip into cap space to re-sign him.

“Consider one example: Durant’s max salary for 2016-17 will be about $25 million, leaving $15 million or $20 million to split between Wade and Whiteside. That won’t do it, unless Wade takes a massive hometown discount. (By the way: Rail against the Durant rumor mill if you want, but you’re kidding yourselves if you don’t think Riley will set Miami up to make a run at him.)”

As noted by Lowe, the Heat will have to do some roster shuffling if it hopes to even have a chance at landing Durant. That isn’t hard to imagine considering Riley has done it in the past when he landed both LeBron James and Chris Bosh in the summer of 2010.

However, if Miami does seriously pursue the 26-year-old superstar, they will likely have to part ways with either Dwyane Wade or Hassan Whiteside, who are both free agents following this season. Barring some sort of monster season by Whiteside, it’s safe to assume Riley would part ways with Whiteside rather than Wade in his pursuit of Durant. It’s not feasible in any way to believe the Heat can retain all of their core players and land Durant next season.

The former MVP was limited by injuries last season as he played in just 27 games. At his very best, however, he is the league’s best scorer. After LeBron, many would consider Durant to be the second-best player in the game.

It may be a long shot for the Heat to bring Durant to South Beach, but crazier things have happened during Riley’s two-decade tenure with the organization.
[xyz-ihs snippet=”Responsive-Ad”]