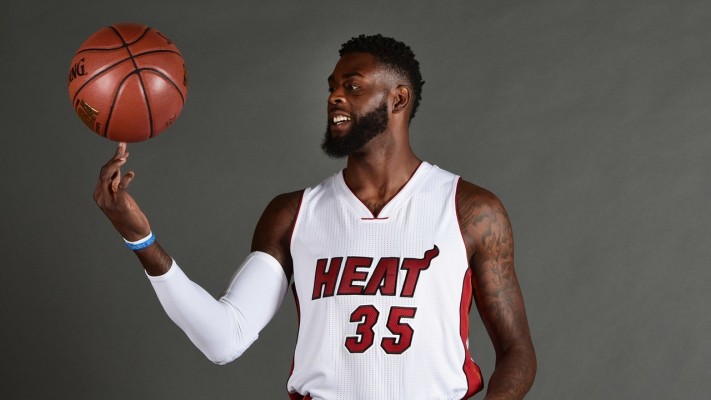 If you didn’t have your pulse on all things Miami Heat over the summer you may have missed it when the team signed 6’10” center Willie Reed. The unproven big man has yet to to become a stable face on an NBA team and he’s hoping all of that is about to change this year.

Miami signed him to a minimum contract this summer in the hopes of translating his raw skills into useful rotation player minutes.

Before he has to prove to the world he can ball with the big boys, Reed gets to complete a childhood dream this weekend and play professional basketball in his hometown, Kansas City. It’s not often that one gets to see an NBA player “ecstatic” about a preseason game, but Reed has cleared a whole lot of obstacles just to be able to put on that Heat jersey Saturday night.

Reed has put in the hard work for every squad that has given him a chance after he was left undrafted in 2011. That includes playing overseas in Spain and the Dominican Republic, hopping around between four different D-League teams, and playing for a host of NBA teams that had kept him around to fill their 15th spot.

He broke through last year with the Brooklyn Nets when they allowed him the chance to meaningfully contribute during regular season games. Reed has fought for every inch during his professional career and that’s why this preseason game against the Minnesota Timberwolves in Kansas City is so important.

“Obviously, it’s a lot of people in my family who never really get the chance to leave Kansas City,” Reed said. “So for them to be able to see me play an NBA game, even though it’s preseason, in Kansas City is definitely a huge deal. I’m thankful for that opportunity to be able to play in front of my family and friends.”

The big man has even purchased extra seats at the Sprint Center so kids from his No Excuses foundation can come and enjoy the game. Reed says the foundation “gives underprivileged kids the opportunities to get into good high schools, get into a good college.”

On Snapchat, he has been raving for weeks about the opportunity to come play at home.

On the court, however, he has to focus on proving to coach Erik Spoelstra that he can be an effective backup to Hassan Whiteside.

“I want everybody to know I’m Kansas City to the core,” Reed said. “I mean, obviously, Kansas City is what made me. It made me the person I am today. So I’m just trying to make sure I do my part to help the city. I think the best way for me to do that is to use this platform, to use this stage. So the more I can be involved in Kansas City, while also living my dream, I think that just helps the city.”

We will have to wait and see his play on the court to judge Reed as a basketball player, but he has already begun to earn the respect of many fans with his toughness and never-give-up mentality off the court.
[xyz-ihs snippet=”Responsive-ImagenText”]