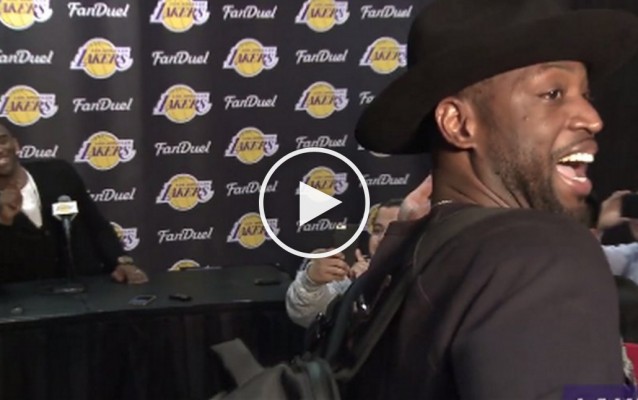 Last night the Miami Heat got to see Kobe Bryant play against them one last time. The five-time champion was limited to just nine minutes on the court but his team took care of business as the Los Angeles Lakers secured a close 102-100 win over the Heat.

One of the few story lines of the game was on how it would be Bryant and Dwyane Wade’s last matchup together. The two elite shooting guards, who also happen to be good friends, went at it early as Wade blocked a Bryant a jump shot in the beginning of the game. Although the five-time champion didn’t play after the first quarter Wade found another way to disrupt Bryant:

The two veterans joked around as Bryant mentioned that the 34-year-old Wade would be the “oldest guy in the league next year.” But as the Heat All-Star left the room, Bryant expressed his respect and admiration for the Heat lifer:

“Man I love him, cause he was a vicious competitor. He’s vicious. He’s mean. You know, we could have those type of battles, and then afterwards hang out, and have a conversation, and lace ’em up and go right back at it, so I enjoy competing against him.”