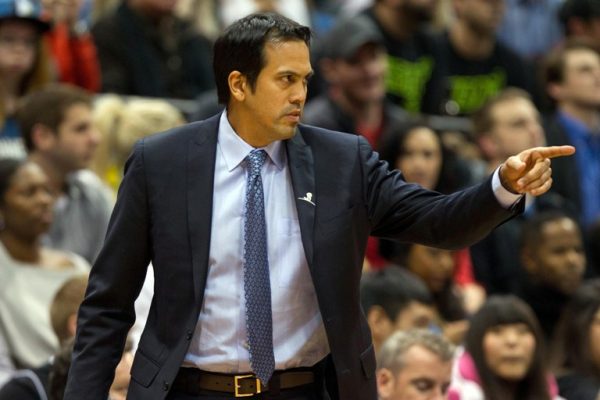 Erik Spoelstra is one of the few active head coaches to lead a team to a championship, but that didn’t stop Dan Dakich from disrespecting him live on air.

Dakich blasted fellow radio host Jorge Sedano’s suggestion that Spoelstra is one of the top two or three coaches in the league. The debate happened during the Las Vegas Summer League quarterfinal game between the Miami Heat and New Orleans Pelicans on Saturday.

. @SedanoESPN almost had to fight @dandakich on air for saying Erik Spoelstra wasn't a top ten coach in the league and that Brad Stevens was a better coach than Spo pic.twitter.com/iAbcCzZj1x

Gregg Popovich of the San Antonio Spurs and Brad Stevens of the Boston Celtics were the head coaches that Dakich suggested were better than Spoelstra.

While Popovich is widely regarded as one of the best coaches in the league, Stevens’ status is far more debatable, especially in light of how his team underperformed last season despite a stacked roster. What made Dakich’s argument even more of a head-scratcher was his proposal that Spoelstra is probably not even in the top 10.

Dakich, former head coach at Bowling Green State University and now the host of “The Dan Dakich Show,” questioned the Heat coach’s ability after LeBron James left Miami in 2014. He didn’t consider how Spoelstra’s teams were still playoff contenders annually since James’ departure, despite having an aging superstar in Dwyane Wade on its roster.

In fact, Wade wasn’t on the Heat’s roster for a year and a half when he played for the Chicago Bulls in 2016-17 and the Cleveland Cavaliers in the first half of the 2017-18 season. Add to that Chris Bosh’s blood clots that ended his career prematurely in 2016, and one can argue that Spoelstra practically willed his teams to the postseason on the strength of his coaching alone.

Dakich also completely ignored the fact that the Heat made it to the playoffs twice under Spoelstra’s watch before James went to Miami in 2010.

Perhaps Dakich was just trying to be controversial during the broadcast, but that doesn’t mean he should have disreputed an accomplished coach like Spoelstra.