Chris Andersen on Recent Trade Rumors: ‘It Doesn’t Bother Me One Bit’ 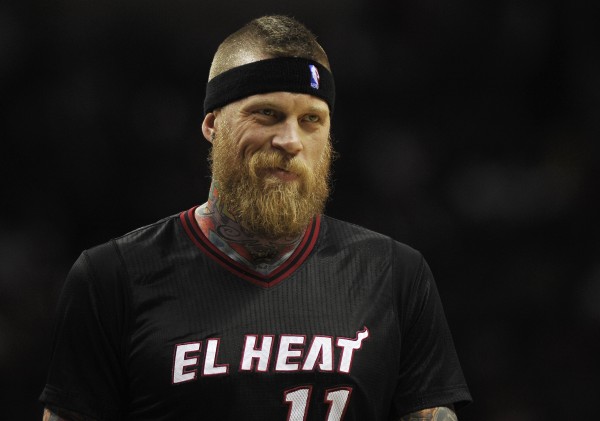 Chris Andersen has been on the trade block all offseason.

The 37-year-old veteran center had his career revived when he joined the Miami Heat as a free agent during the middle of the 2012-13 season. Along the way, he won a championship ring, appeared in two consecutive NBA Finals and even received a hefty contract, which will pay him $5 million for this upcoming season.

However, it may all come to an end over the next several months. While such a situation may bother most players, it doesn’t seem to faze Andersen, who was asked about how he fits into the Heat’s luxury-tax equation during a promotional appearance at Winn-Dixie:

“It’s a business, man. It doesn’t bother me one bit. I still wake up and have…”

Andersen was cut short before he could answer the question in whole. He finished his thought by answering in his usual playful manner.

While the 6’10” veteran may be on his way out of Miami, that doesn’t mean he holds anger towards the Heat for bringing in players that may push him off of the roster—guys like Amar’e Stoudemire and Gerald Green for example:

“It’s all about progression, man. We’re trying to improve ourselves and make sure that we set a precedent of coming into the league this season with a mindset of winning. And I think the guys and the moves that we made are heading in the right direction for us to accomplish our goals.”

With the Heat facing luxury tax penalties at the conclusion of next season, they are attempting to clear cap space by trading both Andersen and Mario Chalmers (due $4.3 million this upcoming season).

Considering Stoudemire, Chris Bosh, Hassan Whiteside, Josh McRoberts and Udonis Haslem will all receive minutes on the frontline on a game-to-game basis for the Heat, it’s hard to envision a scenario where Andersen is on the roster at the conclusion of next season.
[xyz-ihs snippet=”Responsive-Ad”]