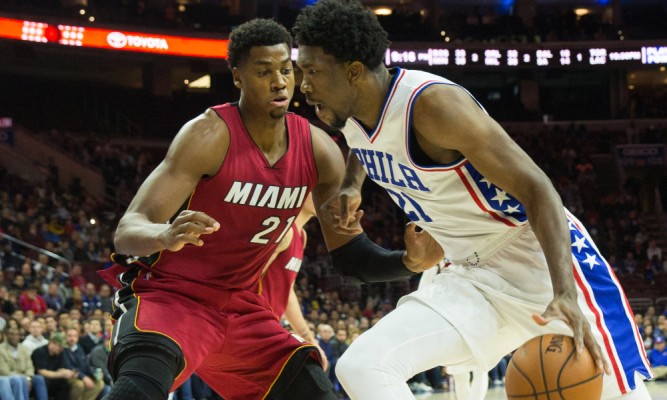 (Kansas City, MO) – In their sixth and final game of the preseason, the Miami Heat (3-3) gave many of their backups extensive time en route to a 119-95 loss to the Philadelphia 76ers (2-3) at Sprint Center on Friday night.

Rising star 76ers center Joel Embiid, who agreed to a massive $148 million contract extension with Philadelphia earlier this week, appeared to taunt the Heat bench early in the game, shouting that center Hassan Whiteside couldn’t guard him after Whiteside had committed his third foul.

The Heat had a very difficult time containing the likes of newly acquired Sixers guard J.J. Reddick and 6-foot-10 point guard Ben Simmons, as the two each had a game-high 19 points on the night.

It wasn’t a night of many noteworthy highlights for the Heat, but forward James Johnson (13 points on 4-of-8 shooting) got the Miami bench to their feet when he crossed over Simmons and threw down a two-handed slam dunk to cut the deficit to 41-38 in the second quarter.

However, the Heat defense was abysmal down the stretch in the first half as they gave up a whopping 69 points to the Sixers and trailed 69-54 at halftime.

For the Heat, the 2017 NBA Draft’s 14th overall pick Bam Adebayo also had an efficient night with 13 points and nine rebounds, while Wednesday night’s hero Jordan Mickey had himself a double-double with 12 points and 10 boards.

With the preseason slate concluded, the Heat will open up their 2017-18 NBA regular season when they travel to take on their Southeast Division rival Orlando Magic on Wednesday night at Amway Center. The Heat opener, which will tip off shortly after 7:00 p.m. ET, will be broadcast live locally on Fox Sports Sun.
[xyz-ihs snippet=”Responsive-ImagenText”]