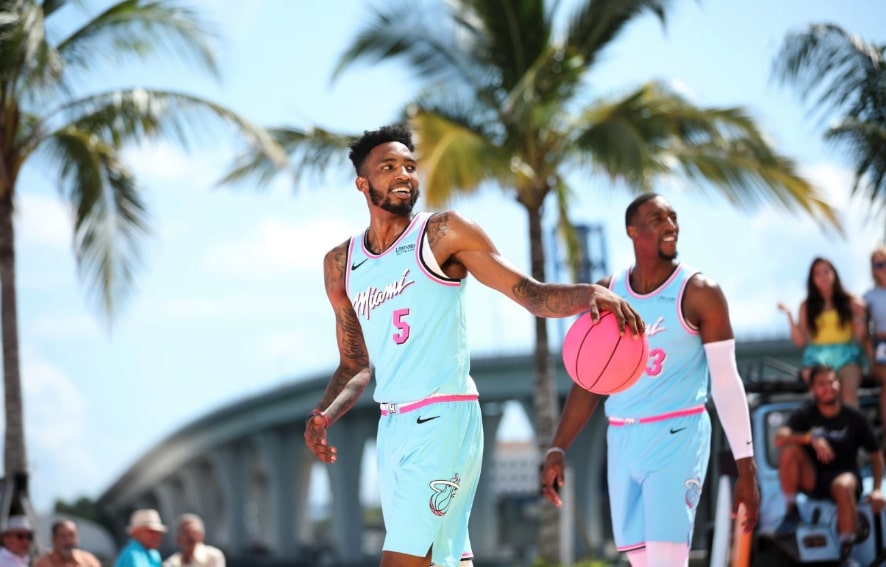 On Monday, the Miami Heat announced the release of their latest uniform and it is a beauty to behold.

The new ViceWave jerseys look very similar to the Vice uniforms that were leaked by Tyler Herro a month ago with just a few minor tweaks. The color is predominantly powder blue with pink and white trimmings.

For those who have been waiting, it is here.

The Heat have dropped ViceWave.

On sale at the arena first, Tuesday night at midnight, then everywhere else. pic.twitter.com/JA0WzTNz6D

According to the promotional video released by the team’s official Twitter account, ViceWave will be first made available at AmericanAirlines Arena on Tuesday night at midnight. After that initial release, the jersey will be available for purchase elsewhere.

More information was provided shortly after the initial announcement. This information detailed some fairly extravagant promotional moves by the team.

If you're on AmericanAirlines 68 from Miami to Madrid tonight, you are getting free Vice gear – jersey and Swag Bag – today from the Heat.

(I do not know if this counts as your carry-on or your personal item.)

More Vice: The Heat will provide a ViceWave onesie for all babies born in local Baptist Hospitals during the month of November.

Additionally, it looks like fans will have the opportunity to purchase ViceWave Dwyane Wade jerseys.

Oh, wait, one more thing on the Vice jerseys:

Even though nobody is currently wearing the number … you can indeed get one with a certain "3" on it.

The ViceWave jerseys could sell like hotcakes so fans should be ready to line up at the arena when they becomes available.

The Heat will play in the ViceWave jerseys for the first time this Friday versus the Golden State Warriors.