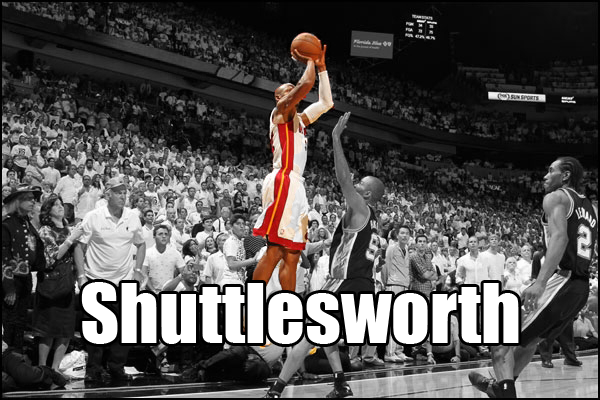 To escape from disaster like the Miami Heat did in Game Six of the Finals, it would take divine intervention that only Jesus Shuttleworth is capable of.  Thankfully, for Miami’s sake, Ray Allen’s three-pointer was a miraculous shot we’ve seen him deliver time and time again; and in overtime, Miami triumphed in what could either be called an epic collapse or a comeback for the ages.

Regardless, it sets up a Game Seven that might not live up to the billing most are likely projecting.  After a game like that, there’s no way the fans will be deprived of an epic finale, right?  Well, not so fast, friend.

The San Antonio Spurs just burnt up their last drop of fuel in the proverbial gas tank—mentally and physically.  Up five points with less than thirty seconds in a closeout game, coached by arguably one of the greatest coaches the league has ever seen, there’s no way they screw that up, right?  Well, it happened, and for these athletes, a Game Seven might be too much of a hurdle for their individual psyches and bodies to overcome.

The pace of the game was brutal.  There were intermittent transition situations, but most of the waning minutes of the fourth and overtime was spent clamoring for rebounds and banging in the paint to score whatever points each exhausted defense would concede.  The veteran officiating crew that included Philly legend Joey Crawford, the ever grouchy Mike Callahan, and Willem DaFoe lookalike Kenny Mauer did a terrific job for most of the contest, and their tendency to no-call most whistles led to scrums more suited for rugby than a game of basketball.  Assuming a similar officiating crew is overseeing this upcoming bout, expect more of the same—grinding, bruising, battling and above all, an even contest as far as whistles are concerned.

Referees aside, the Spurs are likely going to hit the wall at some point during this game. Mentally, Game Six was a shellshock of a loss.  It was the kind of loss that keeps you up at years after.  It was a horrifically unique catastrophe most players replay over and over in their minds struggling to scrape the memory out of existence.  While oddsmakers aren’t soothsayers, they are certainly worth keeping in mind considering sports “investing” is a very lucrative industry after all.  Miami is six-point chalk against the Spurs who are getting most of the early action according to some projections.  People are expecting an epic clash, but they might be in for a triumphant blowout akin to Miami’s final, series clinching win in last year’s championship against the Oklahoma City Thunder.

The Thunder were valiant, but the Heat were lights out. It was an epic torrent of three-pointers, and you can expect the Heat to do the same.  For the oddsmakers to release such an enticing line, it seems to be a line that wants a lot of Spurs action. It’s also worth noting Miami is 2-0 in Game Sevens in the Big Three era, and all of those wins came by double-digits. While these stats mean absolutely nothing to most, it’s worth keeping them in mind if one intends to predict (or attempt to) how this game plays out.

Expect a close dogfight early on, but at some point, Miami will sense the Spurs’ fatigue and clamp down on their neck.  Miami closes out the game in a near blowout, and you can expect LeBron James and the rest of the big three to enjoy the spoils of winning back-to-back championships.