Miami Heat vs. Washington Wizards Game Recap: So Close, Yet So Far 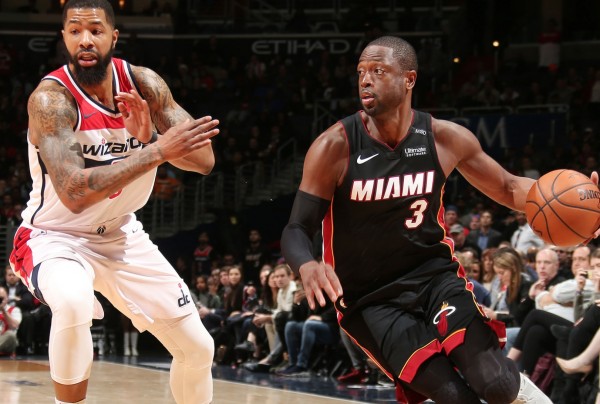 (Washington, D.C.) – The Miami Heat had an opportunity to improve their standings in both the Eastern Conference and the Southeast Division when they faced off against the Washington Wizards on Tuesday night. While the Heat managed to push the game to overtime, they ultimately lost the contest in disappointing fashion, 117-113.

“We weren’t able to capitalize, but there were a lot of other things,” Heat head coach Erik Spoelstra said following the game. “Our guys really competed. There’s plenty of opportunities to make plays and unfortunately, that’s the way it works in this league. There is a winner and there is a team on the other side. I know everybody is disappointed in that locker room, but this is the way it’s going to be for the next five weeks.”

Despite being down by four points earlier in the overtime period, the Heat managed to claw back to within two at 115-113 with 10.2 seconds remaining.

Dwyane Wade had made an acrobatic and incredibly clutch layup earlier in the game, and looked to score a similarly crucial basket as the game clock continued to wind down. Following a quick inbound pass, Wade caught the ball in the middle of the lane and pump-faked before putting up an easy shot with 4.1 seconds left. He missed the shot, however, and while Kelly Olynyk was able to grab the offensive rebound, he missed his attempt as well.

When Wizards big man Kelly Oubre Jr. grabbed the defensive rebound seconds later, it was clear that the game had been decided.

“I’ve always tried to star best in whatever role is asked for me. So it’s certain moments where it asks for me to be a leading man and certain moments where it’s not,” Wade said after the loss. “I’m not always going to be great in them, but hopefully more times than not my teammates feel confident that we’re going to get something good out of it.”

Despite the disappointing loss, the Heat enjoyed several strong performances. Wade and Tyler Johnson led Miami on the offensive side of the ball despite both coming off the bench. Wade finished the night with a team-high 22 points, and added six assists and two rebounds to his stat line. Johnson also played well, scoring 21 points on 8-of-16 shooting.

The game was as close as can be, but the Heat could have easily walked away with the win if they had performed better from the three-point line. In the game, the Heat went 9-of-33 from behind the arc, well below their season average.

With the loss, the Heat now find themselves solidly in second place in the Southeast Division, sitting three games behind the Wizards. They also moved down to the eighth spot in the Eastern Conference, moving one half game behind the Milwaukee Bucks.

The Heat will have one day off before continuing their battle for postseason position against another playoff hopeful team, the Philadelphia 76ers. A week ago, the Heat managed to eke out a victory against the 76ers, 102-101. They will look to get another victory against the talented team this Thursday night.
[xyz-ihs snippet=”HN-300×250-TextnImage”]